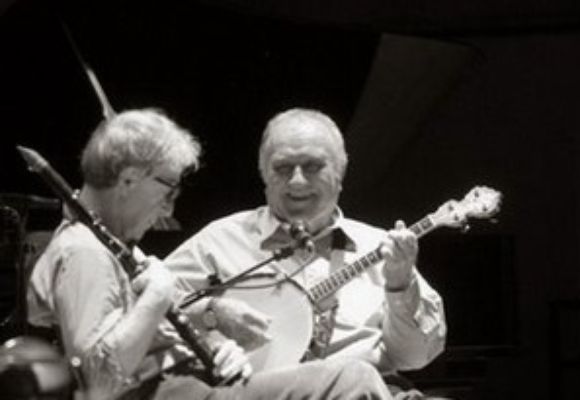 Eddy is a composer and musician extraordinaire. He is the musical director, banjoist and vocalist for the "Woody Allen Jazz Band", which has become a landmark on Monday evenings at New York's famous "Cafe Carlyle".

His lengthy association with Mr. Allen began in Chicago in the early sixties while he was studying composition at the Chicago Conservatory of Music.

Throughout the years he has composed for and acted in Mr. Allen's films. He has been a musical sideman for many films including those of Mr. Allen and Mike Figgis. Eddy has composed and orchestrated music for New York's "Big Apple Circus", conducted and orchestrated the Broadway Musical "Warren G" (directed by Tom O'Horgan) and conducted/musical directed the revival of "Making Whoopee".

From Indiana to Chicago to L.A., New York, Europe and the World, he has performed with many authentic jazz originators such as: Benny Goodman, Gene Krupa, the Village Stompers (including writing some of their "Pop Hits") The original Dukes of Dixieland, "Jabbo" Smith, Vic Dickinson, Milt Hinton, Freddy Hubbard, Leon Redbone and Tom Waits to name a few.

At Michaels Pub, in Manhattan, Eddy's "group in residence" performed to rave reviews in such shows as: "The Great Freddy Moore", "The Best of Spike Jones" AKA "The New York Society For The Preservation Of Illegitimate Music" and "Roots of American Jazz", which included ragtime, tangos, waltzes and anything and everything in American music from 1900 to 1920.

Mr. Davis and Mr. Allen's collaboration has continued through the years. In 1996 they made their first musical tour of Europe, performing 19 concerts in 21 days. There was a very popular documentary film made of the tour entitled "Wild Man Blues". They have continued to tour ever since then.

In the summer of 2007 Woody filmed "Vicky, Christina, Barcelona". While he was filming the streets of Barcelona Eddy and pianist/vocalist Conal Fowkes performed in the beautiful Casa Fuster hotel. They performed a jazz cabaret act 5 nights a week. After a long day of filming Mr. Allen would join them several nights a week with his clarinet. There was a DVD made of one of the performances called "Davis And Fowkes Live In Barcelona" which Eddy is extremely happy with and says is the best example of his performing.

As of the last several years Eddy has settled into his writing. He composes book, music and lyric for theater. In the classical world he has written Preludes, Etudes, String Quartets and larger orchestral works. On occasion in live performance he sings his songs, which are written in the style of the "Classic American Song Book". Mr. Davis has resurrected the old "New York Jazz" Record label where you will find him, along with Mr. Allen and Conal Fowkes accompanied by a string quartet. You will also find two volumes of Eddy and the great guitarist Frank Vignola performing Davis originals.

Other CDs include: "The Eddy Davis Project" featuring Doc Cheatham, Howard Alden and Milt Hinton along with many other great jazz musicians - "The Blind Man On The Corner Singing The Beale Street Blues". An evening of early jazz and blues. This is a musical theatre piece with book, music and lyric by Davis. The CD features Conal Fowkes piano and music director. Jon-Erik Kellso trumpet, Orange Kellin clarinet and Pat Carmichael on drums.

There is also three CD's Featuring Eddy. "Just Sittin' Here Strummin' This Old Banjo". "From Broadway To Hollywood" (Banjo and Dixieland Bands). And the third is entitled: "Banjo" Jass/Rags/Classics.

For much more about Eddy, look at his website, of which he is also very proud: www.TheEddyDavis.com And be prepared for much more from this smiling music man ------------------- "The Manhattan Minstrel"!