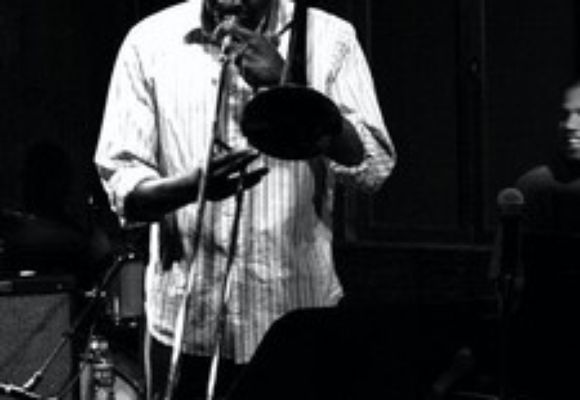 Go to event
Finally, my chance to talk in 3rd person: Music began in the life of Ernest Stuart at the age of 12 while in middle school. He dreamt of playing saxophone, but soon realized that his dream of being a musician had come to a screetching halt when his mother, a single parent of two, could not afford his instrument. To aviod being kicked out of beginners music class young Ernest was given three options for substitutes: Tuba, Baritone Horn, and Trombone... he picked the lesser of three evils... He never looked back. Through out highschool he studied classical music with bass trombonist Jose Vidal in Sicklerville, NJ. Eventually the lessons and hard work paid off landing Ernest in top district orchestras and earning him numerous awards in local jazz competitions. After graduating from high school all roads seemed to lead towards Philadelphia... more specifically Temple University. While at Temple Ernest studied with Luis Bonilla; "This...", he explains, "...changed my life". During his undergraduate studies Ernest began to make a name for himself around Philly as a very versatile trombonist playing various styles of music such as jazz, salsa, r&b,neo-soul, and hip-hop with such artist as Jaguar Wright, John Swana, Jimmy Jorge and the Latin Express, United Soul, Tim Warfield, Mike Boone, The Phantom, Sid Simons, George Burton and more . After graduting from Temple Ernest set his sights on a new city... New York City... and he hasn't been doing too bad at all. He has played in such clubs as the Village Vanguard, Smoke and the Blue Note, and has share the stage with musicians such as Reggie Workman, Charles Tolliver, Terell Stafford, Anthony Wonsey, Doug Purviance, John Mosca, Dick Oatts, Marcus Strickland, Gene Jackson, Jaleel Shaw, Bruce Barth and so on. Ernest continues to be active on the Philadelphia music scene; most notably, he runs the Sunday night jam session at the legendary Ortliebs Jazz Haus. Ernest exclaims, "I just want to be the best I can be and go after things that seems just out of my reach... hey, sometimes I get it sometimes I don't..."