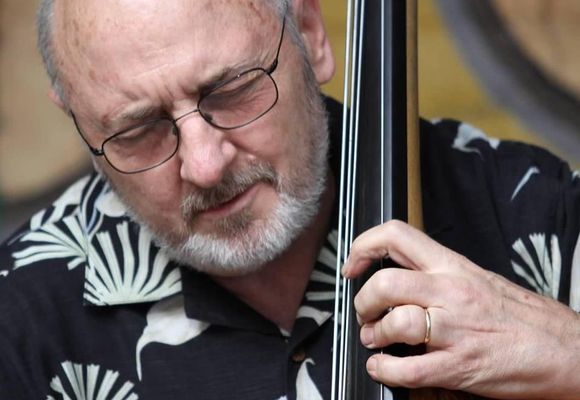 Mike Weatherly is a Brooklyn-based, second-generation bassist from the desert southwest.  He is one of New York City’s most sought-after bassists, known for his instrumental expertise as well as his vocal skills.  Mike has carried on the tradition of high musical standards in a wide range of genres, from jazz and big band to Western Swing and cajun. He is also no stranger to gospel as the longtime bassist for the Lafayette Inspirational Ensemble, with which he performed for President Bill Clinton and Nelson Mandela.  Mike is a member of the Gypsy Jazz Caravan and Cynthia Sayer’s Joyride Band, with whom he tours nationally.  Other performance credits include Banu Gibson, The Ed Polcer Allstars, The The James Langdon New York All Stars, the Stan Rubin Big Band, and most of the leading traditional jazz and swing players in the NYC region. He has also played with legendary folk singer Pete Seeger, composer Philip Johnston, R&B singer Fontella Bass, Western legend Patsy Montana, and many more.

Mike has performed at numerous festivals including the Newport Jazz Festival in Rhode Island, the New Orleans Jazz & Heritage Festival, the TriBeCa Film Festival in New York City, the Bix Beiderbecke Jazz Festival in Iowa, Vancouver Island Music festival in Canada, the Pete Seeger Clearwater Revival in New York, and others.  He appeared in the Promenade Room of the famed Dorchester Hotel in London, and can be seen and heard on the documentary “Body of War,” produced by Phil Donohue. Off-Broadway credits include “Always, Patsy Cline” and Keely Garfield’s “Free Drinks for Women With Nuts.” Mike has recorded albums with the Gypsy Jazz Caravan, Cynthia Sayer, Ed Polcer, Dan Levinson, Molly Ryan, and many others. He continues to play, record and tour regularly.