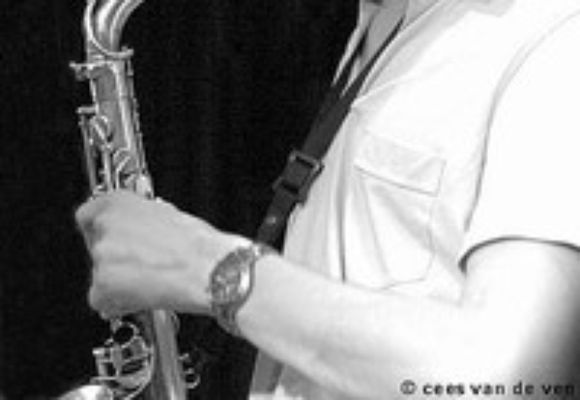 Joris Roelofs, born 1984 in Aix-en-Provence (France), raised in Amsterdam (Netherlands), plays saxophones, clarinet and flute. He started to play classical clarinet at the age of six, and then started the alto saxophone at the age of twelve. He was a member of the Vienna Art Orchestra from 2005 to 2008. Joris also plays lead alto in the Jazz Orchestra Of The Concertgebouw in the Netherlands. He graduated in 2007 as a Master of Music at the Conservatory of Amsterdam. In 2001 Joris won the Pim Jacobs Price, and in 2002 he was given the first price of the Princes Christina Concours for Jazz. In 2003 he received, as a first non-American, the Stan Getz/Clifford Brown Fellowship Award in the US, organized by the International Association Of Jazz Education (IAJE). The IAJE also honored him with a First Level price of $3000. In 2004 Joris received the first price of the prestigious Deloitte Jazz Award in the Netherlands ( ¬20.000 ), a Dutch Award for young musicians who are just about to start their international carrier. In 2008 he was selected for the Thelonious Monk International Saxophone Competition. Among others, Joris played with Ari Hoenig, Eric Harland, Aaron Goldberg, Lionel Loueke, Lewis Nash, Matt Penman, Johannes Weidenmüller, John Marshall, Gary Smulyan, Ralph Peterson, Vanguard Jazz Orchestra, Pete King, Sonny Fortune, Laura Fygi, Christina Branco, and Alegre Correa. As a soloist he performed with the Orkest van het Oosten (classical) and Jazz Orchestra Of The Concertgebouw (jazz), among others. Also he recorded as a special clarinet soloist with the Metropole Orchestra. As a leader he performed twice at the North Sea Jazz Festival, and several times at the Concertgebouw in Amsterdam. In october 2008 he did a European release tour with Ari Hoenig, Aaron Goldberg and Johannes Weidenmüller to promote his debute album Introducing Joris Roelofs. This CD was recorded in New York with Ari Hoenig, Aaron Goldberg and Matt Penman for Wolfgang Muthspiels record label Material Records. There will be a second tour this fall with Aaron Goldberg, Greg Hutchinson and Reginald Veal. Joris also plays in a trio with Jesse van Ruller and Clemens van der Feen.

As a sideman Joris has been playing at a large number of international jazzfestivals and jazzclubs, all over the world. Joris moved to New York City on March 4 2008.