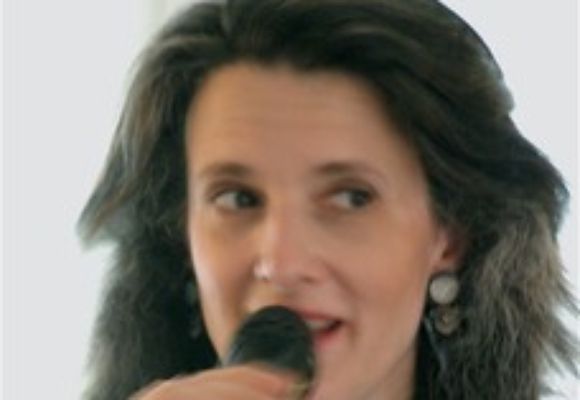 Maria De Angelis, a native of Syracuse, New York, has been singing jazz since attending Berklee College of Music in 1982. She earned her B.A. in Philosophy from Georgetown (1983), and M.Arch. (Master of Architecture) from M.I.T. (1989), where she received the Newman Medal for Acoustic Studies.

While living in Boston, she met a number of young jazz musicians, including Joshua Redman, Mark Turner, and Jorge and Mercedes Rossy. When everyone was ready to move to New York in 1991, she set up a communal house for all of them.

Living in New York with these roommates proved to be a wonderful education for a budding jazz musician. While there she studied singing with several jazz greats, including Sheila Jordan, Andy Bey, and Mark Murphy -- all of whom also sat in at her gigs. She studied piano with Sal Mosca. She traveled through Europe and sang with her friends Michael Kanan and Nat Su.

She was a finalist in the 1994 Thelonious Monk International Jazz Vocal Competition. She held a steady gig at Eamonn Doran in the Hotel Pennsylvania for five years, and sang in many other Manhattan clubs, including Birdland, Cleopatra's Needle, Cornelia Street Cafe, and for a wedding at Carnegie Hall. While in New York, she also worked with theatrical director Deena Levy, and was a Fellow at the 1997 Cabaret Symposium at the Eugene O'Neill Theatre Centre in Connecticut.

Returning to Syracuse in 1997, Maria has written many songs with 70-something pianist and composer Phil Klein. (Learn more about Phil at his website: songtale.com.) She has performed for the Everson Museum, for the Society for New Music, and has been featured several times on local radio shows and TV specials. She has been studying voice with Sonny Farrar, and piano with Rick Montalbano. She has produced the show "Mean to (All of) Me: A Codependent Songbook" with two other singers.

She has produced four CDs: Nothing Is Forever, Cupids Got a Mean Streak, This Ones For O, and Hot Summer . They all feature her favorite NYC band. She has also produced Syd Sings for vocalist Syd Tenenbaum, and was a vocalist on High Hopes, a tribute album to Syracuse native Jimmy Van Heusen.

She was nominated for a 2002 SAMMY Award for Best Jazz Vocalist.