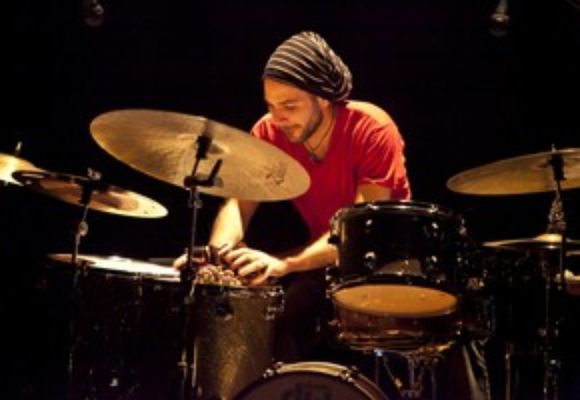 The Will Vinson Quartet

cultural rhythm in the 21st century. With his flexibility, grace and sheer power behind the drum kit, he has proven indispensable to the sound of some of the world’s most acclaimed jazz groups, including the Grammy-nominated Miguel Zenón Quartet (Awake, Esta Plena, Alma Adentro]), Grammy winner David Sánchez (Cultural Survival), the Edward Simon Trio, and the all-star quartet “90 Miles” featuring Sánchez, Stefon Harris and Christian Scott.

Henry is also asserting himself as leader of the Afro-Beat Collective, which releases its debut album Roots Before Branches in 2011. Drawing on the raw groove and momentum of Fela Anikulapo Kuti as well as the depth and complexity of modern jazz, Henry strives with the Afro Beat Collective to integrate all his varied influences, including Puerto Rican folklore, funk and R&B, jazz and Afro-Caribbean rhythmic traditions.

The San Jose Mercury News praises Henry’s “explosively detailed” playing, and All About Jazz notes his ability to “make instantaneous, organic adjustments at every turn.” In an article for Modern Drummer titled “The Future of Drumming” (January 2006), Henry was cited as an outstanding young player to watch by illustrious fellow drummers Alex Acuña, John Riley and Antonio Sanchez. In a 2009 JazzTimes magazine feature, journalist Fernando Gonzalez explored Henry’s visionary approach, his translation of Puerto Rico’s street-style pandero requinto drumming to the drum set — just one example of Henry’s bridging of traditions and disciplines in the service of a unique individual sound.

Born in 1979 and raised in Mayagüez, Puerto Rico, Henry relocated to San Juan in 1997 to study classical percussion at the Conservatorio de Musica de Puerto Rico. He began his jazz immersion at Boston’s Berklee College of Music in 1998, but soon returned to San Juan, where he became one of the most in-demand and influential jazz drummers on the island. There he gained pivotal, formative experience in the varied music scene of Old San Juan: “It was very small,” Henry recalls, “but it had all styles and genres, so it was easy to go from one to the other and learn from all. I was playing rock, salsa, jazz, electronic music, all in the same week. That’s college right there.”

During this time Henry worked extensively within and beyond the world of jazz, with artists such as Giovanni Hidalgo, Dave Valentin, Jerry Gonzalez, Danilo Pérez, Branford Marsalis,Eric Figueroa, William Cepeda’s Afro-Rican Jazz, salsa artists La PVC, the rock band Vivanativa and many more.

Relocating to New York, his current home base, in the fall of 2003, Henry received a scholarship to attend Manhattan School of Music and study with the great John Riley. Since completing his studies, Henry has performed with the likes of Chris Potter, Adam Rogers, Drew Gress, the Chico O’Farrill Afro-Cuban Big Band, Ray Barretto, Orlando “Puntilla” Rios, Papo Vazquez, Perico Sambeat, Paquito D’Rivera, David “Fathead” Newman, Dave Samuels, the contemporary plena group Viento de Agua and many more. He has toured throughout the U.S. and Europe, Mexico and Central America, Korea and Japan.

Besides his influential work with Miguel Zenón and David Sánchez — entailing appearances at the Village Vanguard and other world-renowned jazz venues — Henry can be heard on such fine recordings as Personalities by the Fabian Almazan Trio, Christian X Variations by Soren Moller with Dick Oatts & Kirin Winds, El Alquimista by Pete Rodriguez, and Rocket Science for Dummies by the electro/neo-soul group Astronauts of Antiquity. His work with dancer and choreographer Noemí Segarra includes the evening-length collaborative piece “De Rumbo De Rumba,” premiered at the Hostos Center for Arts & Culture in early April 2011. Henry also performs with Cuban-born, LA-based pianist Alfredo Rodriguez, who records for Quincy Jones’ Qwest label.

Henry is also a successful and sought-after educator, often substituting for his mentor John

Riley at MSM and at SUNY Purchase College Conservatory of Music. His quartet has also taken part in Jazz at Lincoln Center’s “Rhythm Road” (a.k.a. “Jazz Ambassadors”) program, which involves concerts, master classes and lecture-recitals for musicians. In addition, Henry has provided master classes and clinics under the auspices of Carnegie Hall, Marsalis Music and other institutions. He is sponsored by Vic Firth sticks, DW Jazz drums, Latin Percussion (LP) and Zildjian cymbals.

On his debut album Roots Before Branches, Henry has assembled musicians on the order of Sean Wayland, Adam Rogers, John Ellis, Miguel Zenón, David Sánchez, Soren Moller, Egui Santiago, Rey de Jesús, Hérmes Ayala,Poet Mara Pastor and more. Henry’s Afro-Beat Collective pushes the aesthetic of Miles Davis’s Bitches Brew in a strong Afro-Caribbean direction, while also melding Fela’s Afrobeat sound with a jazz-rich vocabulary: “I imagine Fela’s band with Wayne Shorter or Lee Morgan playing the solos,” Henry muses. His main goal is to see music as One World, a space beyond styles, reaching out to audiences of all kinds with a message of determination and unity.