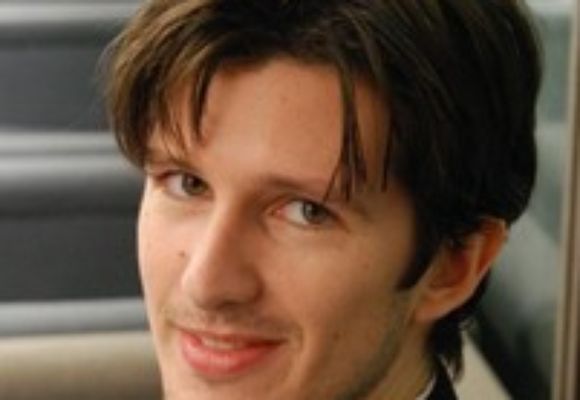 Go to event
As the only child of non-musical parents, it seemed unlikely in his early years that he would pursue a career in music. But he found early inspiration in his kindergarten teacher, who played the piano in class and led the students in song. Some kind of magic happened when he first heard the sound of the piano in person and blended his voice with the other students. He knew at that moment that he wanted to be a musician. Tom asked for piano lessons for his sixth birthday, and thus began his study of classical music. He added the cello at age nine and gained an appreciation for ensemble playing. His skill and musicality grew rapidly, and he was soon receiving top marks in state piano judgings and invitations to play cello with the state honors youth orchestra. One fateful day, Tom walked into the CD store and purchased two albums that would change his life. Those albums were Live at the Pershing by Ahmad Jamal and Straight, No Chaser by Thelonious Monk. Tom immersed himself in the rhythmic, sophisticated music, and began to experiment with composition and improvisation. He joined his high school jazz band in his senior year, and they went on to win awards for best band and best rhythm section at the tri-state competition at James Madison University that year. Attempting pragmatism, Tom enrolled as an engineering student at Virginia Tech, but after meeting some jazz students at orientation, he began taking music classes and switched his major to jazz piano. He also began playing professionally in the area, but soon felt the need to expand. The opportunity came in the form of a scholarship to study at the University of North Florida with renowned pianist Kevin Bales. At UNF he distinguished himself as the schools top pianist, and represented the school in performances in Europe (North Sea Jazz Festival, Vienne Jazz Festival, Montreux Jazz Festival) and throughout the United States (Joe Segal's Jazz Showcase, East Coast Jazz Festival). In 2005, Tom was awarded first place in the national Kathleen T. and Philip B. Phillips Jazz Piano Competition. While still a student, Tom established himself as a first-call pianist and performed extensively with some of the best musicians in the southeast, including Delbert Felix, Ben Tucker, Von Barlow, and Kebbi Williams. He also began attracting critical acclaim, receiving review as an artful performer who improvises with remarkable facility and a large vocabulary of fresh ideas, a youthful but masterful virtuoso, and [a musician who] plays with maturity and authority way beyond his years. Feeling the need once again to expand his horizons, Tom made the move to New York in 2006. He was invited to audition at the Juilliard School and enrolled the following year, where he studied with jazz piano master Kenny Barron. Tom has performed all over town including top venues such as Birdland, Blue Note, and Jazz at Lincoln Center. Though he has come a long way since kindergarten, he still feels the same magic and excitement for music that first inspired him as a young boy, and evokes that joy each time he plays. Toms star is rising and the future looks promising; keep your eye on him, the best is yet to come!