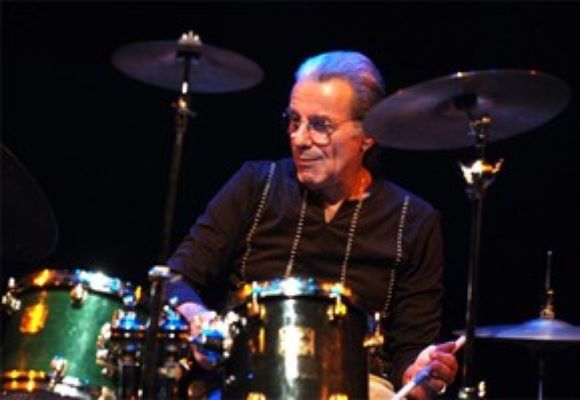 BARRY ALTSCHUL was born on January 6, 1943 in New York City, during the Be-Bop revolution in Afro-American improvised music. Blessed with a keen rhythmic and melodic sense ; he found himself involved in the city's vital jazz scene where he was inspired, accepted and encouraged by such major players as Elmo Hope, Art Blakey and Philly Joe Jones. He studied drums formally with Charlie Persip and Sam Ulano, and music composition with Lee Konitz. Barry's career kicked into a high gear in 1964 when he joined the Paul Bley Trio, an association that led to international tours and festivals and over time, a dozen recordings (including two as a co-leader). In 1965 he performed with the Jazz Composer Guild Orchestra. In 1969 he toured and recorded several album with Chick Corea Trio. Then he helped form Circle, a critically acclaimed cooperative quartet which featured Chick Corea, Anthony Braxton and Dave Hollande. After Circle disbandes in 1972 Barry played with Lee Konitz, The Paul Winter Consort and Hampton Hawes among many others. At that time Barry also began to share his knowledge by using innovative teaching methods with a growing number of students when he was home in New York; by writing articles on drums and percussion instruments; by giving seminars or conducting percussion workshops at schools and universities throughout the USA (inclu. Havard, Oberlin, N.Y.U.. and Berkeley School of Music.)

Between 1973-1977, (during NY's Loft Jazz era) Barry played drums and percussion for two of the most challenging bands of the time: The Anthony Braxton Quartet and the Sam Rivers Trio. In 1976 he recorded his first album as a leader ("You Can't Name Your Own Tune"-Muse). Critical praise was unanimous. Nat Hentoff called it "A record classic of the time", and Downbeat gave it a five star rating. By 1978 Barry began to carve his niche as a leader of his own groups by touring and recording with such top flight artist as Dave Hollande, Muhal Richard Abrams, George Lewis, Sam Rivers, Arthur Blythe, Enrico Rava, John Surman, Anthony Davis, Ray Anderson, Glenn Ferris, Mark Helias, Santi Debriano, Andy McKee and Uri Caine. As a guest percussionist, he performed with the indianapolis and Taos Symphony Orchestras. In the course of his career he continues his global travels to collaborate with top European, Arab, African, Japanese, and Indian (as well as American) artists on as diverse art forms as the ballet, opera and world music projects as well as performing for national radio broadcasts, T.V. concert, jazz festivals and top dates. Other special recording or concerts have included dates with Sonny Criss, Tony Scott, Gary Peacock, John Scofield, John Abercrombie, Steve Swallow, Art Pepper, Buddy Guy, Johnny Griffin, George Lewis, Clifford Jordon, Richard Davis, Kenny Drew, and many others. In the early'80's, Barry, like a number of American artists, moved to Europe (Paris) where genuine appreciation for even the most challenging jazz, style attracted musicians from all over the globe. While living abroad Barry continued performing and teaching. Mr. Altschul has been an affilate artist at Sarah Lawrence Collage since 1996 where he teaches a rhythm class, Drumset, combo and a jazz history course. In 1999, Barry was the artistic and musical director, as well as drummer in a jazz program he started at a New York club called The Caviarteria where over a period of seven months, 28 jazzworlds great and reputable pianists and bassists played with him. Barry is also performing composing, and recording with his other bands with the likes of Dave Douglas, Roswell Rudd, Uri Caine, Hilliard Greene, Billy Bang, John Tchicai, Paul Smoker, Joe Fonda, Hayes Greenfield, Steve Swell, Mark Helias, and many others.