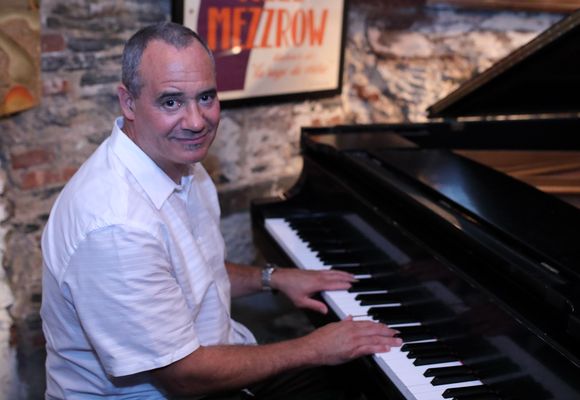 Chicago native Greg Murphy has been a major contributor to the New York City jazz scene since the 1980s and he's probably best known for his twenty-two year association with John Coltrane’s multidirectional drummer, Rashied Ali.

Greg began his musical adventures in 1971 when he joined the Ray-Fisk Grammar School Band in Chicago. His classical studies began later that year with Lucia Santini at Roosevelt University. Between 1980 and 1984, he played with the jazz/funk band Lightning Flash Thunder Roar, The University of Illinois at Chicago Big Band, The Northern Illinois University Big Band, and other local Chicago bands.

A jazz study grant from the National Endowment for the Arts in 1984 gave Greg the opportunity to go to New Orleans and study with the eminent pianist and jazz educator, Ellis Marsalis. He remained there and began recording and performing with The New Orleans Jazz Couriers, Percussion Incorporated, and his own group, The Fusicians. The Percussion Incorporated album, Drum Talk, (Greg’s first recording) was recorded and released in 1987. While living in the crescent city, Greg performed with Donald Harrison, Wynton Marsalis, and countless other great musicians.

Greg moved to New York in 1987 and began what had become a long association with multi-directional drummer, Rashied Ali. Greg performed and recorded with Ali and his various groups throughout Europe, Canada, the United States and beyond, from 1987 until Rashied passed away in 2009.

Throughout his career, Greg has performed in Japan, China and The Philippines with his own trio and other groups. He’s also worked in New York with Ornette Coleman and in France with Carlos Santana and Archie Shepp. In 2012, Greg recorded the theme song “Brother, Can You Spare a Dime?” for the HBO documentary Redemption, which received a 2013 Academy Award nomination for best documentary short. “Bright Idea,” his latest critically acclaimed CD (featuring Jeff “Tain” Watts) was #1 on the JazzWeek charts in February and March of 2019.