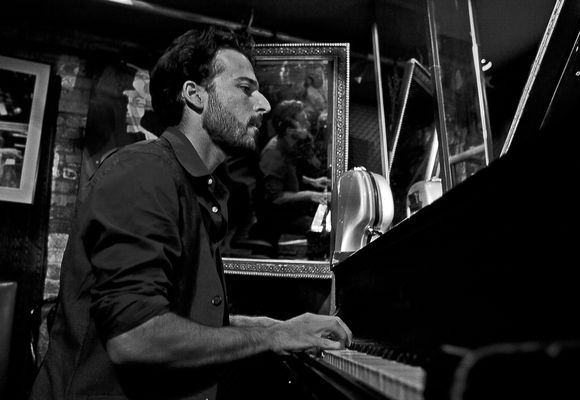 Hailed as “an impressive soloist and an immaculate accompanist” (Richard Kamins) with “a bright future” (Scott Yanow), Brooklyn-based pianist, composer and bandleader Jarrett Cherner has captivated listeners with his lyricism, technical facility and consistently evolving musical vision.Originally from San Francisco, where he garnered praise as “one of the most exciting young pianist-composers on the Bay Area scene” (Andrew Gilbert, San Jose Mercury News), Cherner debuted on his own BaldHill Music label in 2006 with the compelling trio release Burgeoning, which earned recognition from the ASCAP Young Jazz Composer Awards. As a driving force behind the collective jazz quintet Sketches (sketchesmusic.com), Cherner released two albums, both critically acclaimed: Sketches Volume One (BaldHill, 2013) and Volume Two (Brooklyn Jazz Underground, 2014).Cherner’s 2016 trio release Expanding Heart (BaldHill, due October 2016) features bassist Jorge Roeder and drummer Jason Burger in a set that reflects personal growth, combining original material with covers of wildly disparate songs by Vincent Rose, Otis Redding and Ornette Coleman. Also to come in 2016 is Cherner’s vlog #StandardsWithFriends, a series of home duo recordings with guests to be announced.After earning a B.S. in mathematics from Tufts University in Boston, Cherner went on to a Jazz Piano Performance Degree from New England Conservatory, where he studied with master teachers Danilo Pérez, Jerry Bergonzi, Frank Carlberg and Michael Cain. Returning to San Francisco for a time, Cherner then moved to New York in 2008 to pursue graduate studies at Manhattan School of Music, studying with Jason Moran, Garry Dial and Dr. J. Mark Stambaugh. He has since toured throughout the U.S. as well as South America, Canada, Mexico and Europe, as both a leader and sideman. An adjunct professor at Franklin & Marshall College in Lancaster, PA, he also teaches through the New York Jazz Academy, and privately and via Skype from his Brooklyn studio.Cherner’s first instrument was the violin: he began Suzuki method at age 7 and continued for 8 years. He also took up piano and drums at age 12 and played both throughout high school. His chief inspirations as a violinist were Vivaldi and Bach, but after an ill-fated attempt to sit in with a friend’s rock band — they had no sheet music — he became intrigued by improvisation and the deeper mysteries of music. Able to play only from the page or from memory, he felt limited and thus found his way to jazz conceptually, before he actually heard it. Once a teacher recommended an Oscar Peterson record, he was hooked.​From those auspicious but roundabout beginnings, a world-class talent was born. Cherner was a semifinalist at the 2011 Montreux Jazz Piano Competition and had the honor of performing solo piano at the Whitney Museum as part of Jason Moran’s 2012 BLEED residency. Jazz audiences and fellow musicians are closely watching his growth as a virtuoso soloist and a seasoned, independent-minded artist.