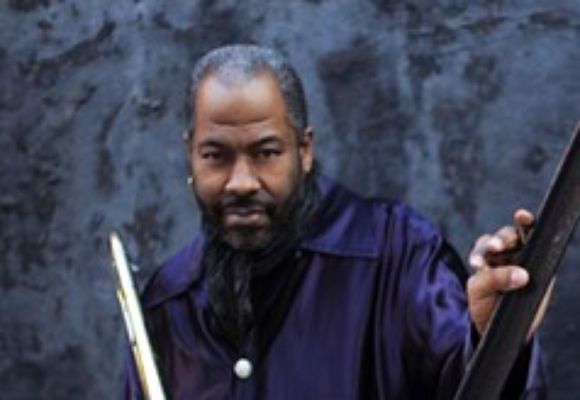 Clifton Anderson was born on October 5, 1957 in Harlem, New York City. He grew up surrounded by music. His father was a church organist /choir director, and his mother a singer and pianist. It was no surprise that Clifton exhibited an affinity for music at an early age. When he was seven years old he got his first trombone, a gift from his uncle, Sonny Rollins. Clifton attended the prestigious Fiorello LaGuardia High School of Music and Art in New York City and is a graduate of The Manhattan School Of Music. Clifton made his first record date with Carlos Garnett in 1976 and has since worked with a “who’s who” of diverse musical giants from Frank Foster, McCoy Tyner, Clifford Jordan, Stevie Wonder, Dizzy Gillespie, Merv Griffin and The Mighty Sparrow to Lester Bowie, Dee Dee Bridgewater, Paul Simon, Terumasa Hino, Keith Richards, Muhal Richard Abrams, WyClef Jean, Geri Allen, T.S. Monk, Charlie Haden, Slide Hampton and Wallace Roney among others. Clifton joined Sonny Rollins’ group in 1983, touring worldwide and recording ten releases with him until 2009. Clifton worked on the Grammy Nominated “Without A Song /911 Concert” CD and produced four releases for Sonny’s Doxy Records label:  “Sonny, Please”, the DVD “Sonny Rollins in Vienne”, “Road Shows Vol. 1”, and Clifton’s own “Decade”.

In 1997 Clifton released his first recording as a leader/producer on the Milestone/Fantasy label entitled Landmarks. Landmarks received international acclaim and made the top ten play lists on US Jazz radio coast to coast. While working with Rollins, Clifton also contributed as artist in residence at Duke University from 1999 to 2001. In 2007 Clifton went back into the studio as a leader to produce Decade, his first recording in approximately ten years. Clifton received a nomination for 2009 “Trombonist Of The Year” from The American Jazz Journalists Association.

At the end of 2009 with the release of the critically acclaimed Decade, Clifton left Sonny’s band to actively lead his own group full time. Continuing to receive stellar reviews from live performances, Clifton headed back into the studio in September 2011 to record the highly anticipated “And So We Carry On”.

“With people increasingly faced with turmoil, uncertainty and crisis, I wanted to create music that uplifts the listener and offers a sense of hope to prevail”.

And So We Carry On immediately created a buzz among musicians and on it’s release climbed to #4 on national jazz radio, remaining in the top 20 for months. And So We Carry On  was voted “One of the top CD releases of 2012” by Jazz Inside Magazine and has been called “A modern jazz essential” by Eric Harabadian.

Clifton is currently performing with his quintet before enthusiastic and appreciative audiences in support of this recording.