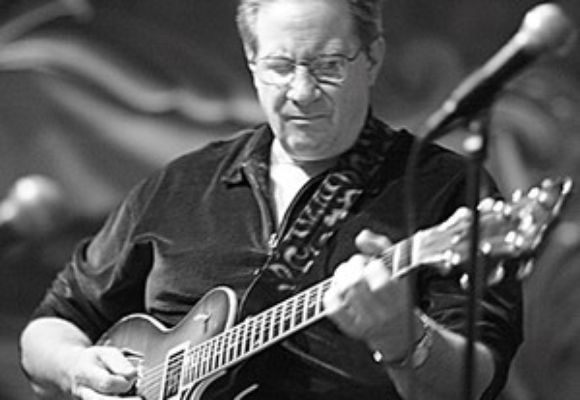 FROM THE WILDS OF MANHATTAN to the shores of Japan and Germany, jazz guitarist Vic Juris has covered an impressive range of territory, musically as well as geographically. Inspired by rock and roll legend Chuck Berry, the Jersey City native first picked up a guitar at the age of ten. With no musicians in the family, he taught himself to play and was soon appearing with rock and R&B bands throughout the tri-state area. But the young rocker's taste soon changed.

In his late teens Vic discovered jazz and classical music. He was hooked. From there it was on to a career with the likes of Dizzy Gillespie, Phil Woods, Jimmy Smith, Sarah Vaughan, Chico Hamilton, Dave Liebman, Richie Cole, Mel Torme, Eddie Jefferson and Nancy Wilson.

From the beginning Vic's voracious appetite for new musical experiences led him to explore any and every jazz artist he could hope to learn from. He drew on other idioms as well: blues, swing, bebop. In a less sensitive and technically accomplished musician this expansive vocabulary might descend into cacophony. But Vic's highly developed sense of composition, his skill at fusing traditional jazz guitar with other forms of expression, has made him an eloquent and popular conversationalist. Eagerly sought out by his fellow musicians, he has provided accompaniment for numerous recordings.

In the mid eighties Vic teamed up with the phenomenally talented guitarist Bireli LaGrene during an engagement at Fat Tuesday's, a New York City jazz club. Vic and LaGrene, a young gypsy whose spirited style recalls that of legendary guitarist Django Reinhardt, began playing together regularly. Their popular performances were charged with the intensity of two masters challenging each other to new heights. One thing led to another. Vic and LaGrene toured Europe together. They recorded Bireli LaGrene Live, featuring Vic Juris for the German label Jazzpoint.

It was during this time that Vic started spending a lot of time on the continent. He toured with alto saxophonist Richie Cole; pianist and composer Michel Legrand and then again as part of a guitar trio with Bireli LaGrene and Englishman John Etheridge.

Vic found a warm welcome in Europe, where audiences are somewhat more sophisticated in their appreciation of jazz. European promoters were quick to book him, confident that he would draw a crowd. While spending much of his time in Europe, Vic nevertheless managed to keep busy back in the states. He often teamed up with guitarist Larry Coryell playing festivals and Jazz Clubs throughout the country. He also traveled with Gary Peacock in duet throughout the European circuit.

Vic has been a member of the David Liebman group since 1991. This band has recorded 10 CDs, traveled throughout Europe, Japan, Israel, and the United States throughout the 1990s and is still going strong till this day. He was a member of the Gary Peacock Quartet and musical director of the Charles Mingus Guitar Quintet. Vic performed at George Wein's J.V.C. Festival, in duets with John Abercrombie and Russell Malone. He performs with Jeremy Steig, James Moody, Charlie Mariano to name a few.

As a leader Vic Juris is performing in the U.S. and in European venues. His own quartet includes saxophonist Dick Oatts. Vic's band has recorded records on Steeple Chase, "Night Tripper", "Pastels" 1997, "Moonscape" 1998, "Remembering Eric Dolphy" 2000. His CD "Songbook" hit top 10 pics in 2000. Vic has also recorded on Double Time Records "Music of Alec Wilder." Vic's 2004 release of "Blue Horizon" listed him as top pics for the year 2004. Mr. Juris is currently recording for the Mel Bay label for release in the spring of 2005. Vic currently tours as a special guest, with his own band or in duo with vocalist Kate Baker.

Vic Juris is also one of the leading jazz educators throughout the world. He has written two books published by Mel Bay, "Vic Juris Inside/Outside: Original Play-Along Modern Jazz Guitar Solos" and "Modern Chords:Advanced Harmony for Guitar". Both books are highly regarded by up and coming guitarists. He currently teaches at The New School for Social Research, Rutgers University, and Lehigh University. He has conducted clinics throughout the US and Europe.