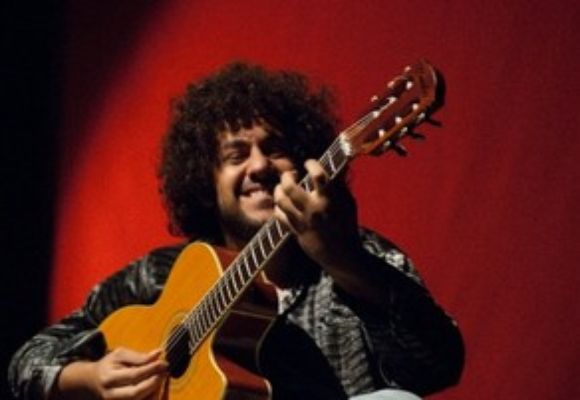 Diego Figueiredo was born in Franca, Brazil, in 1980, and at the age of 4, he used to strike poses carrying his small guitar. At six, he got a mandolin, which was kept in a very special place in his house. Diego played many instruments before choosing the electric guitar when he was twelve, playing in theaters and local pubs, revealing the great art of improvising and harmonizing. At 15, he conquered theaters and nightclubs in many different Brazilian states, playing solo or with renowned musicians. For some years he joined different bands, like Banda Gênese and Squema Seis from Brasília, where he lived for a while. He has studied classical guitar, Brazilian Popular Music and jazz in conservatories in Franca, Ribeirão Preto and Tatuí. In 1999, he won first place in a contest in South America , when he was awarded a scholarship to study at Berklee College of Music, and when he got all judges amazed with his particular style. In June 2001, Diego Figueiredo conquered second place in VISA Prize of Instrumental Brazilian Popular Music, receiving high praise from the judges maestro Nelson Ayres, Guinga, Paulo Bellinati, Arrigo Barnabé, Ulisses Rocha, Rodolfo Stroeter, Benjamim Taubkin, Mário Zaccaro and others. He was finalist for the ICATU HARTFORD Prize in Rio de Janeiro and was praised by the judges Marco Pereira and Cristóvão Bastos as one of the greatest guitar soloists. Nowadays he accompanies the singer and songwriter Belchior in tours around Brazil and abroad. He has played and shared the stage with , Al Di Meola, John Scofield , Yellow Jackts, Hermeto Paschoal, Geraldo Azevedo, Sebastião Tapajós, Demônios da Garoa, Vanusa, Osvaldo Montenegro, Toquinho, Tunai, Paulinho da Viola, Nando Cordel, Edson Cordeiro, Dominguinhos, Moraes Moreira, Amelinha, Los Hermanos, Ednardo, Zeca Baleiro, Miyazawa and others. Besides being a guitar player, Diego is a producer, arranger, orchestrator, multi-instrumentalist and has recently produced and arranged the double album As várias caras de Drummond for which Belchior wrote the music for Drummond..s poems, and which was released in CARAS magazine. In performances around Europe, mainly in Germany, Diego impressed with his technique and sensitivity performing at the University of Berlin, at Quasimodo (where he shared the stage with John Scofield and Yellowjackets) and at the Brazilian Embassy. In 2001, 2002, 2003, 2005, he performed at La Paz Festijazz, held in Bolivia. In the first year, it was a duet with harmonica player Gabriel Grossi, and then a quartet with Daniel Santiago, Amoy Ribas and Gabriel Grossi and in the last year he played with the pianist Alexandre Piu. Diego was invited by the Symphonic Orchestra of La Paz to take part in the recordings of a CD and a DVD and to perform in some concerts to honor Tom Jobim, entitled Jobim de los Andes. This semester Diego will be releasing some works: a classical album, another album in which he plays several instruments, an album he produced for a Bolivian singer, and a book on Improvising entitled New Patterns. In July 2007 and 2005, Diego was the winner of Montreux Jazz Guitar Competition (Montreux Festival, Switzerland) and considered to be one of the greatest guitar players in the world. The competition had the jury presided by Al Di Meola and Gerge Benson . Diego was recently in New York as a special guest to give a workshop and to perform 3 concerts in IAJE  International Association for Jazz Education.

Diego Figueiredo has just released his album Autêntico and has been performing around Brazil and abroad. Accompanied by great musicians, he presents an amazing show of sensitivity, technique and emotion which impresses all audiences.

He is considered by the critics as one of the greatest guitar players of the present time. He is to star on the most sophisticated stages in the world (O Estado de São Paulo) by Paulo Bellinati. He is one of the greatest arrangers I have ever seen. He is a monster. I am glad to be contemporary of this genius. (Radio Eldorado) by Guinga. Diego Figueiredo is not from Franca, he is from the world. (Hermeto Paschoal -Visa Prize). Diego is a light for Brazilian music.. (Belchior). He is a revelation. Few guitar players can do the same with so much assurance and imagination. He makes pure and complex sound like Joe Pass and Helio Delmiro(Mauro Dias).  His arrangements go new and honorable ways. (Lauro Lisboa: Estadão). I have never seen such a creative guitarist with such a clean technique (Roberto Menescal). From zero to ten I say twenty. The guitarist who listens to the album Segundas Intenções down to its last details will certainly take some time off (Mauricio Enhom). It was the best played guitar I have ever seen in my whole life (Paulinho Nogueira). Dear Diego: I listened to you CD Segundas Intenções and it was a magic moment. When I go to Brazil, I would like to play with you (Pat Metheny)