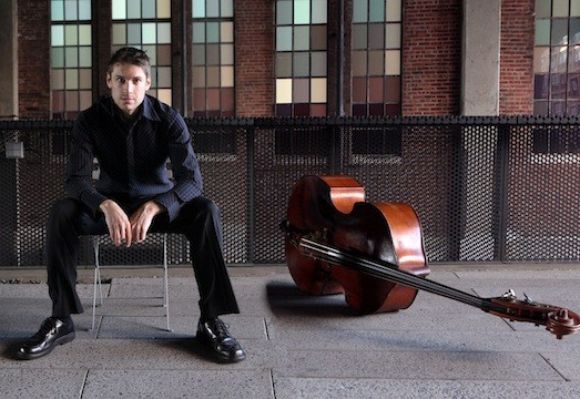 Bassist/composer Ben Allison is one of a few band leaders working in jazz today who has developed his own instantly identifiable sound. Known for his lyrical melodies, inventive grooves and inspired arrangements, Ben draws from the jazz tradition and a range of influences from rock and folk to classical and world music, seamlessly blending them into a cinematic, cohesive whole.

With his groups The Ben Allison Band, Man Size Safe, Peace Pipe, and Medicine Wheel, Ben has toured extensively throughout the US, Canada, South America and Europe, winning fans and building new audiences with an adventurous yet accessible sound and a flair for the unexpected.

In 2005, Ben was honored with the Bird Award, The Netherland’s most prestigious jazz-related award, in a ceremony held at the North Sea Jazz Festival.

“I see the the whole process — from assembling a band, writing and work-shopping the music, recording and mastering the album, doing the artwork and writing the notes, and then touring the project — to be all part of the process of musical expression.” says Ben. “I enjoy every step as they all demand a certain kind of positive energy. And I get to collaborate with a wide range of very creative people.”

Ben’s album Action-Refraction reached #1 on the CMJ National Jazz radio charts and remained in the top 20 for over three months, making it one of the most-played CDs of 2011. His previous six albums achieved similar radio success, garnering him 6 SESAC National Performance Awards, and have been named as among the best of the year by publications such as Billboard, NPR, The New York Times, The Boston Globe, The Village Voice, Jazz Times, Jazz Journalists Association, Downbeat Critics Poll, All About Jazz, Coda (Canada), and Jazz Review (UK), among many others.

At the age of twenty-five, Ben formed the Jazz Composers Collective — a musician-run, non-profit organization based in New York City that is dedicated to constructing an environment where artists can exercise their ideals of creating and risking through the development and exploration of new music. As the Artistic Director and a Composer-in-Residence of the Jazz Composers Collective, Ben has produced or co- produced over 100 concerts and special events, including the Collective’s annual concert series (which ran for eleven seasons), national and international tours by Collective artists, an on-going Collective residency at the Museum of Modern Art (MoMA, NYC), and an annual “Jazz Composers Collective Festival” at the Jazz Standard — which has drawn international attention as a mainstay of New York City’s musical life. As a member of the Collective Ben has received commissioning, performing, and recording grants from Chamber Music America, the Mary Flagler Cary Charitable Trust, the National Endowment for the Arts, the Aaron Copland Foundation, Meet the Composer, and the American Composers Forum.

Born in 1966 in New Haven, Connecticut, Ben has performed the world over with musicians ranging from oudist Ara Dinkjian to saxophonist Lee Konitz to legendary performance artist Joey Arias. He has appeared on over 40 albums by various artists and has written music for film, national television and radio, including the theme for the National Public Radio (NPR) show On the Media (which boasts a listernship of over 1,000,000 people per week) and the score for Two Days, a play written by Pulitzer Prize-winning author Donald Margulies. He was a featured artist with the Jazz Sinfonica Orchestra of Sao Paulo in 2005 and 2008.