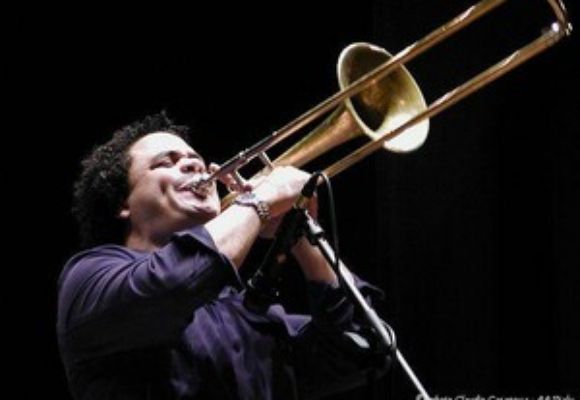 You would be hard-pressed to identify a musician as comfortable with classical music as he is with jazz, indie rock, folk and reggae. You would be equally hard-pressed to identify a musician who can rock with Levon Helm (formerly of The Band) on weekends, fly to Istanbul for a command performance, pack the house weekly in New York at nublu, make recording sessions, wax eloquent about music history and the fundamentals of musicianship, tour with friends in support of their fledgling bands, and still find the wherewithal to record a big band piece from scratch in the remaining spare time (you must listen to the phenomenal re-recording of Tina,Too) & unless you happen to know Clark Gayton.

Clark Gayton was born in Seattle, Washington, January 18th, 1963. After graduating high school in 1981, Gayton received a scholarship to attend the Berklee School of Music in Boston, Massachusetts, from which he graduated in 1984. Gayton then moved to Oakland briefly before moving to New York in 1987.

Since living in New York, Clark has worked with some of the finest jazz musicians in the world, such as Charles Tolliver, Lionel Hampton, McCoy Tyner, The Duke Ellington Orchestra, the Mingus Big Band, Ted Nash and Odeon, Ben Allison and Medicine Wheel, the Carnegie Hall Jazz Orchestra, the Count Basie Orchestra Nancy Wilson, and Ray Charles. Clark recently toured with Bruce Springsteen as part of the Seeger Sessions band. Clark has recorded or performed with Prince, Rhianna, Brazilian Girls, Steel Pulse, Wyclef Jean, Queen Latifah, Quincy Jones, Sting, Whitney Houston, Stevie Wonder, Santana, Maxwell, The Skatalites, and Bad Brains, to name a few. In addition, he is a strong advocate for musicians rights and has been a panelist for discussions about the online and independent music industry.