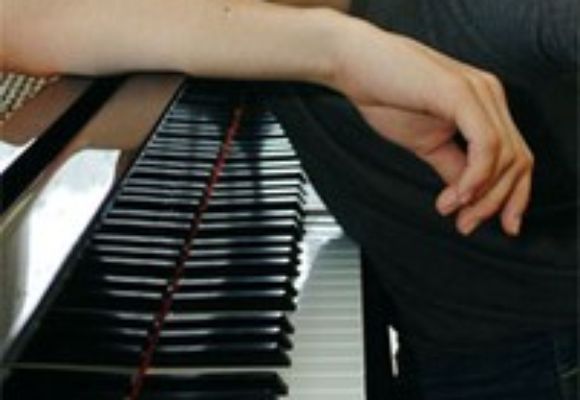 When Eldar was signed to Sony Classical at the age of 17, the young pianist from Kansas City was already well known for his prodigious pyrotechnics and precocious knowledge of the bebop tradition. Along the way, he's had the good fortune to meet and/or work with the masters including Dr. Billy Taylor, Marian McPartland, Dave Brubeck, Michael Brecker, Wynton Marsalis, Ron Carter, Herbie Hancock, etc. Through these opportunities and other wonderful musical experiences, Eldar continues to explore new frontiers through composing and performing, enabling him to ultimately to realize his own musical vision.

At age 22, Eldar has reached a whole new level of maturity in his new trio recording entitled Virtue, which is scheduled for release on August 25. His fourth album on Sony Masterworks, Virtue affirms his position at the forefront of contemporary jazz and is a fitting follow-up to his 2008 Grammy-nominated album, re-imagination. Partnered by bassist Armando Gola and drummer Ludwig Afonso, Virtue features stunning original compositions by Eldar and demonstrates the continued development of his writing. Eldar also welcomes guest appearances by trumpeter Nicholas Payton and saxophonists Joshua Redman and Felipe Lamoglia.

Virtue balances exhilarating youthful energy with a new found sophistication and depth of reflection that mirrors his personal and creative growth. "I'm so proud of this album, more so than any I've done so far," he insists. "In many ways, you could think of it as a soundtrack to my direct experiences since I've moved to New York City."

It's been three years since he relocated from Los Angeles and began processing the stimuli that his new home provided. The result is Virtue, which is at the same time adventurous and accessible. Its individual tracks combine to create an impression as complex as an urban skyline. Eldar and his group build on this idea by challenging each other through interactions as alive as the rush of humanity through city streets.

Eldar came to the U.S. from Kyrgyzstan in the former Soviet Union when he was ten. His first performance here was at the Interlochen Center for the Arts in Michigan. He quickly then moved up the ranks and was featured on the NPR Marian McPartlands Piano Jazz show at the age of twelve. He then released two albums independently, Eldar [D&D] in 2001, which was followed by the release of his second disc, Handprints, in 2003. In 2004, Eldar signed with Sony Classical and recorded his third album, which is also self-titled featuring the great bassist, John Patitucci, and Michael Brecker on tenor sax. He followed up with the critically acclaimed Live at the Blue Note featuring Roy Hargrove and Chris Botti in 2006. One year later, his eagerly anticipated recording, re-imagination, displayed Eldar incorporating new influences resulting in his first Grammy nomination and rave reviews. The New York Times stated, A blend of musical intelligence, organizational savvy, enthusiasm and prowess that was all the more impressive for seeming so casual&an ebullient impressionist. Dr. Billy Taylor said, Eldar Djangirov's playing shows brilliancy, complexity, and discipline& he's serious about his music, he's thoughtful about what he does. Perhaps Jazz Times summed it up best: Maybe he made a pact with Lucifer to be the greatest pianist ever&

Eldar has appeared at many festivals including IAJE, Lionel Hampton, Jakarta, SXSW and CMJ and has toured throughout North America, Europe and Asia. He has performed at venues ranging from the Hollywood Bowl to Carnegie Hall and has played at the most notable jazz venues in the world including Blue Note (NY, Japan, Italy), the Vanguard, Dizzys, Yoshis, Jazz Alley, etc. Eldar has been seen on national TV including the 2000 and 2008 Grammy Awards, Late Night with Conan OBrien, CBS Saturday Early Show, and Jimmy Kimmel Live.

2008 was a banner year for Eldar including a Grammy Nomination for Best Contemporary Jazz Album. 2009 has Eldar touring around the world including upcoming debuts at North Sea, Pori and Vienna Jazz Festivals, the Jazz Standard and Highline Ballroom in NYC, and concerts with Dave Brubeck, McCoy yner and the NHK Orchestra among others. Eldar attended the University of Southern California and currently lives in New York City.