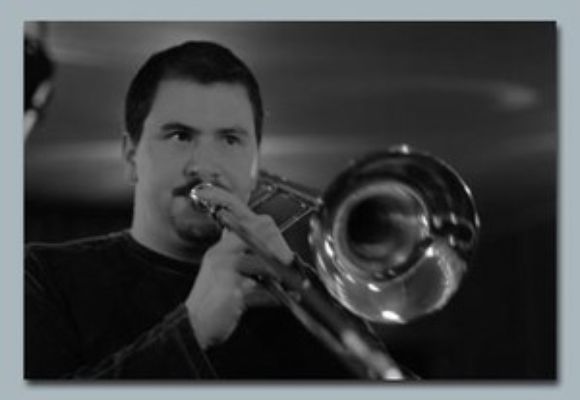 Trombonist Mark Miller grew up in Racine, Wisconsin and attended nearby Carthage College. In 1992 he moved to Minneapolis to study at the University of Minnesota with Tom Ashworth and Ron McCurdy. An ever-present sound on the Twin Cities music scene in the 1990s, he played with and composed for Motion Poets, Slide Huxtable, Happy Apple, and Jeanay Say Qua. Mark also performed with the Latin Sounds Orchestra, Salsa Del Soul, and the Intergalactic Contemporary Ensemble.

Mark was a founding member of the jazz sextet Motion Poets, in which he and the other members each composed an eclectic repertoire of hundreds of pieces during their eight-year tenure (1993-2000). They recorded three albums: Truth And Consequence, Standard Of Living, and Lose Your Mind And Come To Your Senses. Motion Poets also traveled extensively, performing in 37 states and were featured at many jazz festivals, including: San Jose Jazz Festival, Iowa City Jazz Festival, Discover Jazz Festival, and the BYU Jazz Festival.

In 2002/03 Mark hit the road for ten months with the Broadway musical Swing! which featured Mark as a soloist and an integral part of the production. In January of 2007 he completed a three year tour of the Tony award winning hit Broadway musical Movin Out, which featured the music of Billy Joel and the choreography of Twyla Tharp. A featured vocalist and member of the nine-piece rock band, Mark and his colleagues received rave reviews across the U.S., Canada and Japan.

Thrilled to be home after years on the road, including stops in 46 states and 17 countries, Mark is again pursuing his more creative interests. He has just released the debut CD of his long time Minneapolis based jazz quartet Slide Huxtable, entitled 'The Return of Slide Huxtable'. The album contains nine tracks, four of which are Marks original compositions. Now back in New York City, he is preparing to record his first solo album to be released in the summer of 2008.