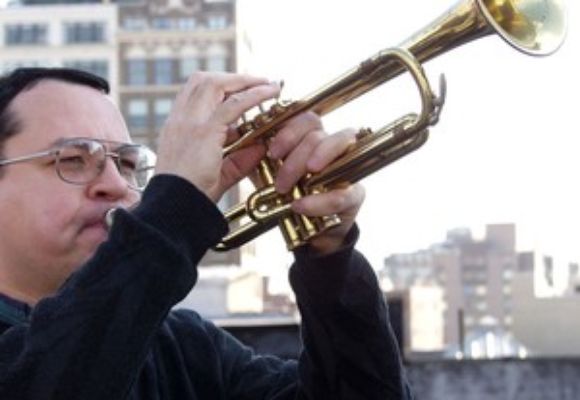 Since 1982, trumpeter Ron Horton has been an integral part of New York's flourishing jazz scene and he stands out both as an exemplary instrumentalist and as a highly progressive composer and arranger. Whether called upon as a sideman or as a leader of one of his own ensembles, he shows that he is committed to further expanding the existing perimeters of jazz.

Horton has had many long musical associations with leaders such as saxophonist Jane Ira Bloom (1983-2000) and pianist Andrew Hill. He was a member of Hill's sextet from 1998 until 2003, and appears on the group's critically acclaimed cd, Dusk (Palmetto 2000). He was also musical director and co-arranger for Hill's big band, and is featured on the cd, A Beautiful Day (Palmetto 2002).

Horton has also had an integral collaboration with New York's Jazz Composers Collective, going back to its inception in 1992, and appears on several cds by the other members of the group, such as Ben Allison and Michael Blake, as well as the collective's Herbie Nichols Project. In 1995, Horton went to the Library of Congress and uncovered over three dozen of Nichols' songs that had never been recorded. Several of these works appear on the three cds released by the HNP on Soul Note and Palmetto.

Through his work with the JCC, Horton has received composing grants from the Mary Flagler Cary Charitable Trust and Meet the Composer.

In 1999, Horton released his debut cd, Genius Envy (OmniTone), featuring Jane Ira Bloom. All About Jazz said of the cd, "(Horton) shines as a formidable composer, arranger and leader. (It's) not difficult to discern why Horton is highly respected within jazz circles". Subtextures, Horton's first release on Fresh Sounds New Talent (FSNT-175) features pianist Kimbrough, bassist Allison and drummer Matt Wilson. It includes four new original compositions, as well as those by Kimbrough, Hill, Olivier Messiaen, and Frederic Chopin. The cd was selected by Jazzman magazine (France) for its CHOC award as one of the top cds of 2004. Jazzwise (UK) also chose it as one of the top cds of 2004.

In October 2008, the Juilliard Concert Jazz Ensemble, under the direction of Ted Nash, performed an evening of Andrew's Hill's music utilizing Ron's arrangements, which had been previously written for Hill's A Beautiful Day and for the Jazz Composers Collective.

Horton's newest cd, It's a Gadget World (ABEAT ABJZ-067), is a collaboration with Italian pianist Antonio Zambrini. The cd features compositions by Ron, Antonio, Paul Motian and Andrew Hill, and the quartet is completed by bassist Ben Allison and drummer Tony Moreno