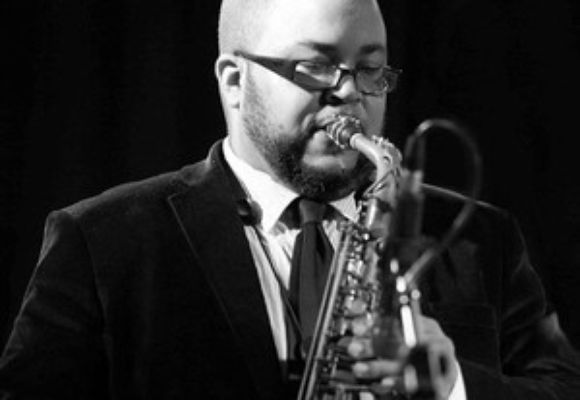 Saxophonist, Lummie Spann grew up in Hartford, Ct, where he began playing saxophone in middle school at the age of 10. His initial attraction to the instrument came from his parents, who listened to artists like Grover Washington and David Sanborn. A few years later, he enrolled in the music program at the Artists Collective, a community performing and visual arts school in Hartfords North End, founded by legendary jazz saxophonist and educator, the late Jackie McLean. During this time, he was taking jazz saxophone lessons with instructor Kris Jensen and playing in the Artist Collective Youth Jazz orchestra where he was able to study and cultivate relationships with some of the areas best musicians including, saxophonists Jimmy Greene, Wayne Escoffrey and Abraham Burton; trombonist, Steve Davis; pianist, Zaccai Curtis; and bassist, Luques Curtis. In high school, Spann attended the Greater Hartford Academy of Arts where he studied under master jazz bassists, Dave Santoro and Paul Brown.

Upon graduating high school, Lummie received a full tuition scholarship to the Hartt School of Music at the University of Hartford where he continued his studies under the tutelage and mentorship of Jackie McLean. He also studied with world-renowned bassist, Nat Reeves, Steve Davis, pianist, Michael Weiss, and pianist, Harold Danko. He was also able to travel to New York City to study with legendary jazz masters, Frank Foster, Charles Davis, and Dr. Donald Byrd. In 2001, he graduated with honors with a Bachelor of Arts degree in African American Music. He also established his own band, which he currently co-leads with bassist, Dezron Douglas, called the New Jazz Workshop. He also began teaching as an adjunct professor for the Hartt School.

In 2006, Lummie completed the Betty Carter Jazz Ahead Artist Residency at the John F. Kennedy Center for the Performing Arts in Washington, DC. Selected from an international pool of over 350 jazz composers, Spann was among 20 musicians chosen to write, arrange, perform, and record original jazz compositions for a worldwide audience; while under the guidance of legendary jazz masters including Curtis Fuller, Dr. Nathan Davis, the late Dr. Billy Taylor, George Cables, Chip Jackson, Carmen Lundy and Winard Harper. Later, he also recorded an album project entitled, Live & Direct.

In 2007, Spann began graduate study at the SUNY Purchase in New York under the tutelage of master multi-reedist, Steve Wilson, trumpeter, Jon Faddis, and bassist, Todd Coolman. In 2009, he received his Master of Music degree in Music Performance. In 2011, he was the recipient of the Jackie McLean Fellowship awarded by the University of Hartford. Lummie was the first performing artist to receive the honor.

So far in his performance career, Lummie has had the opportunity to perform for many important figures including President Bill Clinton, Jesse Jackson, Colin Powell, Bill Cosby and Merle Evers. He has performed with such jazz notables including Louis Hayes, Cyrus Chestnut, Steve Davis, Nat Reeves, Winard Harper, George Cables, Onaje Allan Gumbs, Jeremy Pelt, and the Curtis Brothers. He performs nationally and internationally at many notable jazz clubs, festivals and other venues. Lummie Spann is currently an assistant professor of music at the Jackie McLean Institute at the Hartt School, University of Hartford.