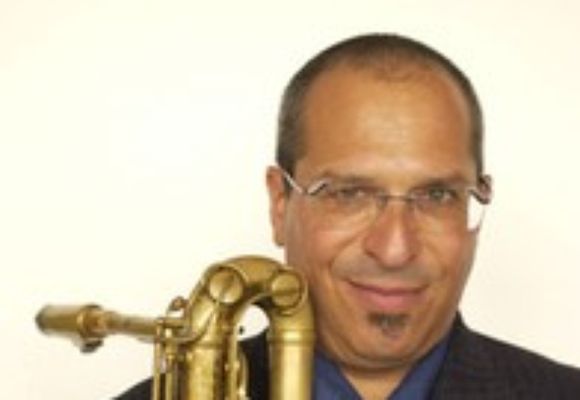 Baritone saxophonist Gary Smulyan was born April 4, 1956, in Bethpage, New York. The gifted multi-instrumentalist started his music career by first learning alto saxophone during his teenage years on Long Island. Today he is critically acclaimed across-the-board and recognized as the major voice on the baritone saxophone. His playing is marked by an aggressive rhythmic sense, an intelligent and creative harmonic approach -- and perhaps most importantly  a strong and incisive wit.

While still in high school, he had the chance to sit in with major jazz artists such as legendary trumpeter Chet Baker, saxophonist Lee Konitz, trombonist Jimmy Knepper and violinist Ray Nance.

After graduating high school he attended SUNY-Potsdam and Hofstra University before he joined Woody Hermans Young Thundering Herd in 1978. It was a remarkable collection of young musicians who ultimately would find themselves in the forefront of present-day jazz. Joining Smulyan in the band were saxophonist Joe Lovano, bassist Marc Johnson and drummer John Riley, who would eventually become a fixture in the Vanguard Jazz Orchestra.

In 1980, unlike many of his colleagues and peers Smulyan didnt have to go very far to move into New York City proper where he became part of the Mel Lewis Jazz Orchestra then under the direction of Bob Brookmeyer. Smulyan also found work with other important large ensembles including the Mingus Big Band and the Smithsonian Jazz Masterworks Orchestra.

Smulyan, in addition to performing and recording in support of a myriad of people began to accumulate a discography as a leader. At this point in his career he has at least 10 recordings out under his own name. Meanwhile he continues to play with wide variety of artists  each presenting him with an opportunity to fully express himself. In addition to his work on Monday nights with the Vanguard Jazz Orchestra, Smulyan remains close with Lovano, working with him in his nine-piece Nonet; then there is the exhilarating and liberating Dave Holland Octet and the seminal bassists Big Band. Beyond that, Smulyan has also enjoyed stints in the cooperative Three Baritone Saxophone Band as well as working with powerhouse tenor saxophonist George Coleman in his octet and the Dizzy Gillespie All-Star Big Band that, similar to the Vanguard Jazz Orchestra, is comprised of some of the worlds best players.

No matter who he is performing with  or whether he is leading his own band at the time  Smulyan brings to the stage the spirit, style and savvy of a deep-toned master of bebop. Gary Smulyans lineage comes more from musicians like Cecil Payne, Leo Parker, Pepper Adams, Serge Chaloff and Nick Brignola  the few baritonists that dared to master the tricky, chromatic music known as bebop, wrote All About Jazzs Francis Lo Kee in a review. Indeed&Smulyan is fluent in the language. He was heavily influenced by Adams who was known as The Knife for his hearty tone and the energy of his rhythmic playing style. Smulyans Homage, featuring Tommy Flanagan was recorded following Adams death, and every track on the recording, released in 1994, is written by Adams. Similarly, Smulyan organized the Three Baritone Saxophone Band, which places him in the company of two of his seniors  Ronnie Cuber and the late Nick Brignola. The group released Plays Mulligan in 1998, the date serving as a tribute to the late Gerry Mulligan, one of the foremost baritone saxophonists in jazz history and a mentor for many artists, including Smulyan.

Smulyan's tone seems to get bigger and his ideas more expansive from album to album, wrote long-time critic Doug Ramsey in Jazz Times magazine. In 1995, WBGO, the all-jazz, Newark, N.J.-based NPR station voted Smulyans Saxophone Mosaic as one of the best 25 CDs of 1995; two years later the Boston Globe selected the baritone saxophonists Gary Smulyan with Strings as one of the 10 best jazz CDs of 1997. Hidden Treasures, a piano-less trio date featuring Christian McBride was given four and a half stars in Down Beat magazine and voted as one of the best CDs of the year.

Always in search of new ideas, in 2008 Smulyan released High Noon  The Jazz Soul of Frankie Laine; it is a nine-piece band tribute to the prolific 1940s and 1950s pop singer Frankie Laine who died in 2007 at age 93. This is the kind of album whose melodies linger after the sessions over, wrote another long-time critic, Owen Cordle of Charlotte News and Observer.

These days Smulyan the Long-Island native lives in Amherst, Mass., with his wife, pianist and conductor Joan Cornachio. He is a faculty member of Amherst College and serves as the artistic director at the Berkshire Hills Music Academy in South Hadley, Massachusetts, a two year post secondary music school for eighteen to thirty year olds with developmental disabilities.

The baritone saxophonist, is a four-time winner of the Down Beat Critics and Readers Polls and a multiple winner of numerous other official polls including the Jazz Journalists Award for Baritone Saxophonist of the Year. He is a six-time GRAMMY award winner for his work with B.B. King, Lovano, Holland and the Vanguard Jazz Orchestra.