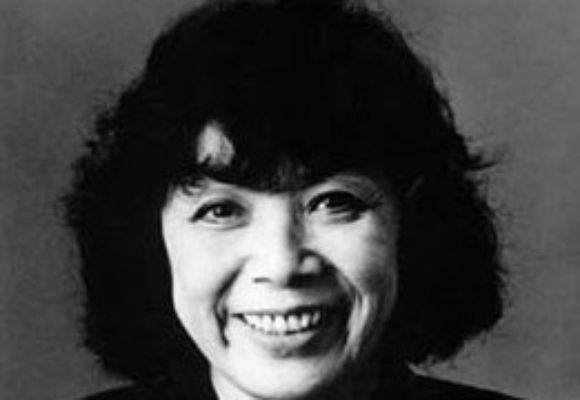 Toshiko Akiyoshi (Ë OP or P OP, Akiyoshi Toshiko?, born December 12, 1929) is a Japanese American jazz pianist, composer/arranger and bandleader. Among a very few successful female instrumentalists of her generation in jazz, she is also recognized as a major figure in jazz composition. She has received 14 Grammy nominations, and she was the first woman to win the Best Arranger and Composer awards in Down Beat magazine's Readers Poll. In 1984, she was the subject of a documentary film titled Jazz Is My Native Language. In 1996, she published her autobiography, Life With Jazz and in 2007 she was named an NEA Jazz Master by the U.S. National Endowment for the Arts

Akiyoshi was born in Liaoyang, Manchuria to Japanese emigrants. She was the youngest of four sisters. In 1945, after World War II, Akiyoshi's family lost its home and returned to Japan, settling in Beppu.

Akiyoshi began to study piano at age seven. When she was 16, she took a job playing with a band in a local club. Beppu was crowded with US soldiers, and musicians were in high demand to provide entertainment. Akiyoshi had planned to attend medical school, but she loved playing piano; and since she was earning good money, her family didn't object to her pursuing music.

A local record collector introduced Akiyoshi to jazz by playing a record of Teddy Wilson playing "Sweet Lorraine." Akiyoshi immediately loved the sound, and began to study jazz. In 1952, during a tour of Japan, pianist Oscar Peterson discovered Akiyoshi playing in a club on the Ginza. Peterson was impressed, and convinced producer Norman Granz to record Akiyoshi. In 1953, under Granz's direction, Akiyoshi recorded her first album with Peterson's rhythm section: Herb Ellis on guitar, Ray Brown on bass, and J. C. Heard on drums. The album was titled Toshiko's Piano, and has since been reissued on CD.

In 1955, Akiyoshi wrote a letter to Lawrence Berk asking him to give her a chance to study at his school, Berklee College of Music. After a year of wrangling with the State Department and Japanese officials, Berk secured permission for Akiyoshi to study in Boston. He offered her a full scholarship, and he mailed her a plane ticket to Boston. In January 1956, Akiyoshi enrolled to become the first Japanese student at Berklee. (As of 2000, roughly 10% of Berklee's student body comprised Japanese students.) While in Boston, Akiyoshi studied with legendary music teachers Herb Pomeroy, Madame Chaloff, and Richard Bobbitt. The latter taught her about Joseph Schillinger's System of Musical Composition, which influenced her approach to composition. On March 18, 1956, she became known to the entire country as a mystery guest on the popular television game show, "What's My Line?"

Akiyoshi married saxophonist Charlie Mariano in 1959. In 1963, the two had a daughter Monday Michiru. The pair formed several bands together, until their divorce in 1967. That same year, she met saxophonist Lew Tabackin, whom she married in 1969. Akiyoshi and Tabackin moved to Los Angeles in 1972. In March 1973, they formed a 16-piece big band composed of studio musicians. Akiyoshi composed and arranged music for the band, and Tabackin served as the band's featured soloist, on tenor saxophone and flute. The band recorded its first album, Kogun, in 1974. The title, which translates to "one-man army," was inspired by the tale of a Japanese soldier lost for 30 years in the jungle, who believed that World war II was still being fought and thus remained loyal to the Emperor. Kogun was commercially successful in Japan, and the band began to receive critical acclaim. By 1980, the Toshiko Akiyoshi  Lew Tabackin Big Band was considered one of the most important big bands in jazz.

The couple moved to New York City in 1982, where they promptly assembled a new big band (now called the Toshiko Akiyoshi Jazz Orchestra featuring Lew Tabackin). Akiyoshi toured with smaller bands to raise money for her big band. BMG continued to release her big band's recordings in Japan, but remained skeptical about releasing the music in the United States  since the 1950s, big band music has rarely achieved commercial success in the US. While Akiyoshi was able to release several albums in the US featuring her piano in solo and small combo settings, many of her later big band albums were released only in Japan and were available elsewhere only as imports. On Monday, December 29, 2003, her band played its final concert at Birdland in New York City, where it had enjoyed a regular Monday night gig for more than seven years. Akiyoshi explained that she disbanded the ensemble because she was frustrated by her inability to obtain US recording contracts for the big band. She also said that she wanted to concentrate on her piano playing, from which she had been distracted by years of composing and arranging. She has said that although she has rarely recorded as a solo pianist, that is her preferred format. On March 24, 2004, Warner Japan released the final recording of Akiyoshi's big band. Titled Last Live in Blue Note Tokyo, the CD was recorded on November 28 and 29, 2003 but she continues to perform and record as a pianist and occasional guest bandleader.

Akiyoshi lives on Manhattan's Upper West Side with her husband. Besides being musicians, they are both avid wine and cigar collectors.

Akiyoshi's music is distinctive for its textures and for its Japanese influence. When Duke Ellington died in 1974, Nat Hentoff wrote in the Village Voice about how Ellington's music reflected his African heritage. Upon reading this, Akiyoshi was inspired to investigate her own Japanese musical heritage. From that point on, she began composing with Japanese themes, Japanese harmonies, and even Japanese instruments (e.g. kotsuzumi, kakko, utai, tsugaru shamisen, etc.). Her music remained planted firmly in jazz, however, reflecting influences including those of Ellington, Charles Mingus, and Bud Powell. Akiyoshi has spoken of approaching her arrangements vertically, voicing each chord individually, which contrasts with the philosophy advocated by Herb Pomeroy, Bob Florence, and others, of writing phrases in a linear fashion. Akiyoshi often uses five-part harmony in her voicings, which yields a bigger sound from her horn section. One reviewer of the live LP Road Time said the music on her big band albums demonstrates

"...a level of compositional and orchestral ingenuity that made her one of perhaps two or three composer-arrangers in jazz whose name could seriously be mentioned in the company of Duke Ellington, Eddie Sauter and Gil Evans."[1]

In 1999, Akiyoshi was approached by a Buddhist priest named Nakagawa. He asked her if she would consider writing a piece for his hometown, Hiroshima. He sent her some photos depicting the aftermath of the nuclear bombing. Her initial reaction was horror. She didn't see how she could compose anything to address the event. Finally she found a picture of a young woman, emerging from an underground shelter with a faint smile on her face. Akiyoshi said that upon seeing this picture, she understood the message: hope. With that message in mind, she composed the three-part suite Hiroshima: Rising From the Abyss. The piece was premiered in Hiroshima on August 6, 2001. This date was the 56th anniversary of the Hiroshima bombing, and just a few weeks before the September 11, 2001 attacks. The Hiroshima suite was featured on a 2002 CD release bearing the same title, Hiroshima - Rising From The Abyss.

Since her debut recording for Norgran Records in 1954, Akiyoshi has recorded continuously  almost exclusively as a leader of small jazz combos and of her big bands  averaging one studio album release per year over the past 55 years. She has also recorded several live albums in solo, small combo and big band settings, including two big band concert videos. Akiyoshi has released multiple albums for Victor / BMG, Nippon Columbia, Toshiba, Discomate, Nippon Crown and other labels in Japan and for Norgran / Verve, RCA, Columbia / Sony, Concord and her own Ascent label in the US. All of her big band recordings and nearly all of her other early works have been re-issued on CDs over the years.