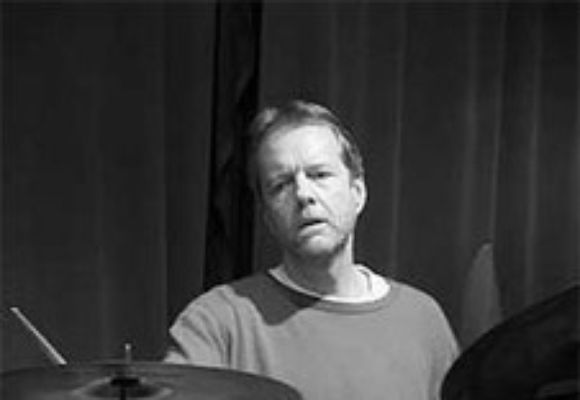 Put the name of Tom Rainey in that big file titled "Drummers Who Deserve as Much Acclaim as the Bandleaders They Play With." And in the case of Rainey, that's saying a lot, because he tends to keep good company on-stage and in the recording studio. He has been the drummer of choice for a range of renowned creative artists from the relatively straight-ahead to the uncompromisingly avant, including Kenny Werner, Jane Ira Bloom, Fred Hersch, Mark Helias, Brad Shepik, Tony Malaby, Angelica Sanchez, Nels Cline, Andrea Parkins, Tim Berne, and David Torn. Rainey's voluminous recording credits and the artistic caliber of the musicians he's supported would easily place him on the A-list of drummers closely identified with the New York City modern creative jazz scene roughly from the late '80s onward, including Gerry Hemingway, Joey Baron, Bobby Previte, John Hollenbeck, Kenny Wollesen, and Jim Black.

Rainey is certainly well known in the somewhat rarefied world of the avant-garde jazz cognoscenti, and he might have even wider recognition were he not seemingly content to occupy the drummer's chair in groups "led" by others rather than "lead" sessions of his own. But despite his impressive list of performing and recording credits, Rainey is thus far (up to early 2009 anyway) without a discography that has his own name emblazoned at the top. And he has not "written" much (particularly in the way of conventionally scored pieces), one noteworthy exception being the free jazzish "Safe at Home" on Souvenir by New and Used, a collaborative New York downtown jazz supergroup of sorts that rose and fell in the early to mid-'90s, and another being the warm and fuzzy "Hostility Suite," a trio number featured on Big Satan's Souls Saved Hear in 2004. Another Rainey writing credit, "Poetic License," surfaces on Visitation Rites by Paraphrase, and given the improvisational nature of that band, this piece might be considered the type of "instant composing" that Rainey does best (or maybe the luck of the draw in a group that doles out its composer credits practically randomly).

So in a music world -- even an avant-garde jazz world -- that attaches significance to "leaders" and affords merely a passing glance to most everybody else, Rainey doesn't shout his presence with bells and whistles (and his drumming is refreshingly gimmick-free as well). The drummer has not been a headline-grabber, but more than anything else this is an example of the myopic tendencies of conventional "jazz" reporting, because Rainey's contributions have been formidable indeed. He is the type of drummer who oftentimes walks the line between jazz as most would define it and the hard-to-define avant-garde, excelling in trio settings. For example, Mark Helias' Open Loose calls for more than a comping, swinging timekeeper and yet also requires a drummer who doesn't merely bring a constant unrelenting blast of free jazz energy to the table -- and Rainey's combination of chops, drive, subtlety, and nuance makes him an ideal member of Helias' bass/sax/drums outfit. Moreover, the drummer is a consummate listener to everything that is going on around him, a true collaborator who finds the perfect moments to engage in freewheeling dialogues with his partners; hang back and let sax, keyboards, or bass take the reins; or grab the ball and run with it, challenging but never getting ahead of his bandmates.

A native Californian who grew up in Santa Barbara, Rainey moved to New York City via Berklee (and after returning to California and living in San Francisco for a while) in 1979 while in his early twenties. The new resident of Brooklyn kicked around town with some straight-ahead jazz gigs in the early '80s, plus a bit of free jazz experimenting, and in the early to mid-'80s met and began playing with saxophonist Berne. At least on recordings, however, Berne's drummers of choice during the '80s and into the '90s were Paul Motian, Alex Cline, Previte, and Black, with Rainey not turning up on a disc with Berne until Big Satan's I Think They Liked It Honey, recorded live in Paris in 1996. But in the interim, Rainey made a lasting impression on discs by Werner, Bloom, Hersch, Helias, Tom Varner, Ray Anderson, Andy Laster, and others, before live and studio dates with Berne began taking up a larger portion of his schedule. On many of these recordings -- including the Paraphrase trio with Berne on saxophones -- Rainey is paired with bassist Drew Gress, and it is hard to imagine a more single-minded rhythm section duo in all of modern creative jazz.

Yet it is with Berne that Rainey has forged perhaps his closest musical partnership, and on whose discs the drummer can be heard to best advantage. In Berne's Science Friction and Hard Cell bands of the early to mid-2000s, Berne found in Rainey and in keyboardist Craig Taborn two musicians who could easily pick up the thematic threads and fragments scattered through the saxophonist's often lengthy compositional/improvisational hybrids. Berne is also a master of building tension, holding back from easy payoffs as he sets two or more instrumentalists on different courses that coalesce gradually -- or suddenly and unexpectedly. Rainey is completely attuned to the utterly unique constructs and skewed rhythmic sensibility of a band like Science Friction (as is Taborn and guitarist Marc Ducret). And the aforementioned Paraphrase trio is another setting for listeners to witness Rainey's mastery of the drum kit, a band that could be viewed as another Berne project but is also a platform for the type of three-way improvisational dialogues that are well within Rainey's discomfort zone. In Paraphrase, it is Rainey's notions of propulsion and momentum as well as texture and color that keep the music moving forward where other collective improvisational experiments might collapse into aimlessness.

Those interested in investigating Tom Rainey's recorded output might be advised to look for anything with his name on it. Visitation Rites and Please Advise, the two Paraphrase CDs released on Berne's Screwgun label, are good places to start for an earful of Rainey at his most freewheeling, if only because these live German club recordings from 1996 and 1998 suggest microphone placement pretty damn close to his flailing sticks (not to mention a couple of drum solos on Please Advise). Also in the world of Berne, the two-CD live set The Sublime And by Science Friction stands as a high watermark for all involved. The 2007 ECM release Prezens includes Rainey in a quartet led by guitarist/soundscape artist David Torn, and also features Berne and Taborn from Berne's Hard Cell unit. And if one feels inclined to keep to a "Tom in a trio" concept, good choices aside from Big Satan and Paraphrase include Come Ahead Back and Verbs of Will by Mark Helias' Open Loose; Short Trip and Drip by the sometimes subtle and understated trio led by guitarist Brad Shepik; Alive in Brooklyn by the sax/Wurlitzer/drums trio of Tony Malaby, Angelica Sanchez, and Rainey; and Ash and Tabula by the noisy soundscape-exploring trio of Rainey, Nels Cline, and Andrea Parkins