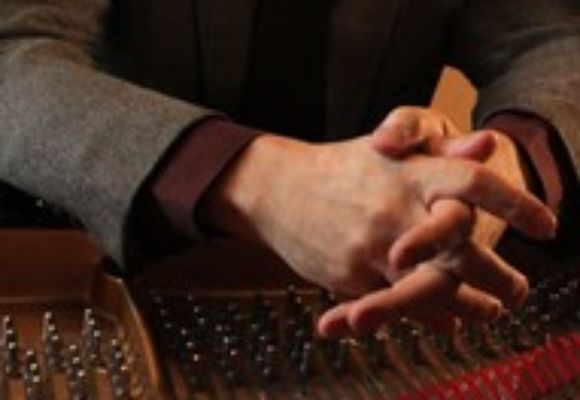 Jazz pianist and composer Bruce Barth has been sharing his music with listeners the world over for more than two decades. Deeply rooted in the jazz tradition, his music reflects both the depth and breadth of his life and musical experiences. In addition to traveling widely performing his own music, he has also performed with revered jazz masters, as well as collaborated with leading musicians of his own generation. And most notably, his performances feature material from his large book of very powerful and imaginative original compositions, written in a voice that is both deeply personal and expressive. In a recent review in the Newark Star-Ledger, Zan Stewart writes No one sounds quite like Barth. His solos are characterized by robust swing, his ability to tell a story, and by his rich, beguiling sound.

Bruce has performed on over one hundred recordings and movie soundtracks, including ten as a leader. He is equally at home playing solo piano (American Landscape on Satchmo Jazz Records), leading an all-star septet (East and West on MaxJazz), and composing for a variety of ensembles. His trio has recorded live at the legendary Village Vanguard in New York City, and he recently released a new DVD, Live at Café del Teatre, on Quadrant, recorded live at the Lleida Jazz Festival in Catalunia.

While in Terence Blanchards band, Bruce recorded his first two CDs as a leader, In Focus and Morning Call for the Enja label; both were chosen for the New York Times top ten lists. These recordings displayed not only Bruces powerfully fluent piano playing, but also the scope of his own compositions and his imaginative arrangements of jazz standards.

Originally from Pasadena, California, Bruce was born into a musical family, and started banging on the piano almost before he could walk. By age five, he was taking lessons, although he preferred to play by ear. When he turned eight, his family moved to New York, where he studied piano and musicianship with Tony and Sue LaMagra for the next decade. For his fifteenth birthday, Bruces older brother, Rich, gave him his first jazz record, Mose Allisons Back Country Suite. Bruce fell in love with both the music and the genre. Inspired, he taught himself to play jazz by listening to records and imitating his many favorite pianists and horn players. Later on, he studied privately with Norman Simmons and Neil Waltzer, and eventually enrolled in New England Conservatory in Boston, where he studied with Jaki Byard, Fred Hersch, and George Russell. Bruces first professional recording was Russells masterpiece, The African Game, captured live on Blue Note Records.

In 2001, Bruce released East and West, which Stereophile called one of the best jazz albums in recent memory. It featured an all-star septet playing Bruces compositions based on his childhood memories of the western United States, with its deserts, ranches and ghost towns. Bruce continues to compose extensively for that septet, which has appeared at major jazz clubs in Manhattan including The Jazz Standard and Smoke, as well as at many European jazz festivals.

In recent years, Bruce has made three solo piano tours of Japan, and has also performed with his trio throughout the United States and Europe. All About Jazz has described the trio, as heard on the Live at Café del Teatre DVD (featuring Doug Weiss on bass and Montez Coleman on drums) as marked by keen empathy, sensitivity, and power.

Bruce served two years on the panel for the U.S. State Department Jazz Ambassadors program, choosing jazz bands to represent the United States overseas. He is also a Grammy nominated producer, with more than twenty CDs to his credit.

Finally, Bruce is a dedicated teacher, with more than ten years on the jazz faculty of Temple University in Philadelphia. He has also taught at Berklee College of Music, Long Island University, and currently teaches private lessons to City College University and New School students. Bruce has participated in many workshops, clinics, and seminars in the U. S. and abroad; he also maintains a private teaching studio, with students from the U.S., South America, Europe, and Japan.