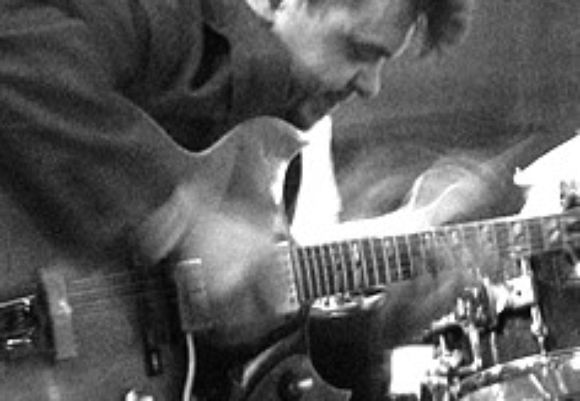 A highly talented and uniquely gifted composer, Jade Synstelien has immersed himself in the venerable traditions of jazz while developing an irrepressible individuality in his compositions and performance.

Jade's music is inspired by the singular goal of bringing American musical heritage to the people of the United States, to spread the understanding and appreciation of our major cultural contribution to the world. Jazz--and all the music born of the jazz tradition--is the truest example of real equality and unification for all people of the earth.

Jade Synstelien was born on August 17th, 1974, in Minneapolis. A musician, composer, arranger, and band leader, Jade picked up the alto sax at age eleven but traded it for a guitar at thirteen. He grew up traveling and living all over the United States, and has worked as a professional musician since the age of fifteen, he has become well-versed in all styles of musical performance. Synstelien began composing when he was thirteen and by seventeen was scoring music for big bands, funk and dance bands, world beat, and reggae bands, and eventually large-scale symphonic jazz works. Ready to form the band that could execute any ideas he could compose, he strove to combine tradition with innovation and offer up something that musicians and audiences would love equally.

In June of 2001 Jade moved to New York City from Taos, NM, yearning to learn from the jazz elders and living legends and to finally form this new orchestra. Mitch Borden, owner of the historic Smalls club, gave Jade the opportunity to have a place to form, rehearse, and perform with his band. The result was a steady Tuesday night gig at his new offshoot club, Fat Cat, in September 2001, originally billed as The Staring into the Sun Orchestra.

After many gigs and years of developing the band and filling it with the greatest rising talent in New York, in 2006 Synstelien renamed his orchestra The Fat Cat Big Band, which performs exclusively his original compositions and arrangements in full swinging force every Sunday evening to this day.