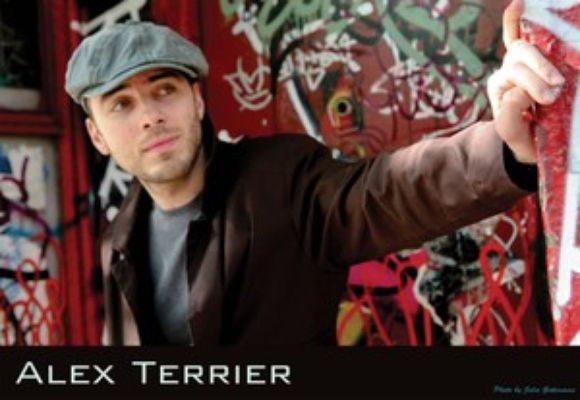 Born in Paris, France, Alex Terrier started playing the piano at age 8, picked up the saxophone at 10, practiced Birds transcriptions by 12 and knew Jazz would lead his path. Since then he has devoted his life to music. After graduating from the National School of Music of Evry, Alex Terrier won the Lavoisier Scholarship (French Department of Foreign Affairs) and a scholarship from Berklee College to study at the famous college in Boston. Three years and a dual Degree in Performance and Composition later, Alex then moved to New York City.

Since the very beginning Alex was interested in composition and he wrote his first melodies on the piano looking at his mother's paintings. He is now a fully accomplished composer and arranger.

A very gifted and expressive saxophonist

So Joe Lovano says of his former student. With his academic background Alex has been teaching and giving clinics in USA, Costa Rica, France, Germany, and Portugal.

He leads several bands, co-lead a show for children presenting the history of Jazz and will soon co-host a Jazz radio show.

"Alex is a very gifted and expressive saxophonist. He's shown in performance a very strong developing conception as a composer and a soloist"  Joe Lovano

He has a very creative imagination and is both an excellent player and accomplished composer/arranger. A superior talent that I would have to place in the top 5% of all the great writer/players I've seen go through Berklee these past 33 years  Ken Pullig

Parisian-born, Brooklyn based saxophonist/composer Alex Terrier, recipient of numerous awards on both sides of the pond, announces the release of his second CD as a leader, Roundtrip (available October 6, 2009), featuring Roy Assaf (piano), François Moutin (bass) + Steve Davis (drums), with Akira Ishiguro (guitar-tracks 2 + 5) and Edouard Brenneisen (guitar-tracks 8 + 10). On Roundtrip, an album of all original compositions, Terrier has created a tour-de-force recording where the energy of the New York jazz scene meets the melodic poetry of European music.

"Alex is a very impressive saxophonist and composer who has organized some beautiful and exciting music with wonderful contributions by notable young players active on the New York scene these days. Terrier has a compelling sound and approach that should interest the serious listener"  Dave Liebman

Terriers earliest days as a musician consisted of performing classical piano pieces. The night he heard live jazz for first time, the Berklee grad decided right then and there to devote his life to music. With Parker, Miles and Coltrane as his early guides to jazz, and the works of Mozart, Beethoven, Schoenberg and Bartok as his first sources of study for composition, Terrier has gone on to developed a highly distinctive and personal voice. Despite the praise received from the likes of Lovano, Liebman, Garzone and others, Terrier is most gratified by the many messages of support he receives from listeners.

Roundtrip opens with the burning, up tempo title track with Terrier coming on like a hurricane on the alto saxophone. Terrier explains, This piece is based on a composition by Wayne Shorter. I wanted to write an up-tempo tune, with the energy and sound that are specific to the New York sound. I hope one can hear the strong influence of artists such as Art Blakey, Wayne Shorter and Bobby Watson. For me it truly reflects the excitement of returning to New York City after traveling around the world!

"An energetic saxophonist, Alex Terrier creates in his compositions a world that is striking and personal"

Terrier wrote The Spirit Will Not Descend Without A Song after reading Blues People by Leroi Jones. E.S.B. And Ecstasy is a composition very much in the stream of the Dave Holland Quintet with long and asymmetrical bass patterns and many different sections. I guess for the solo I'm trying to put myself in a state of electrical stimulation and under ecstasy, said Terrier. On the lyrical, poetic song, Le Miroir Des Anges Déguisés (The Mirror of The Disguised Angels), the saxophonist captures the vibe of a famous place in Paris. Terrier fills us in; You can find this mirror in an old bookstore in Paris located in the center by the river. One should go on the second floor to find it. It is used to leave messages to people around the world who have to come to the mirror to read them (an old fashion IM I guess!). I did leave a message and then wrote this piece. I tried to be as lyrical as possible again, and I wanted it to be poetic. It is probably the most European influenced song in its feel and the compositional techniques I've used.

Tompkins Square, featuring Edouard Brenneisen on guitar, finds the band in a contemplative, but swinging mood, playing a piece that is dedicated to a close friend of Terriers, and a savvy art lover. It was written after the pair walked around the city late one night and ended up in Tompkins Square park hanging out with a crowd of East Village locals all night. Departure is very slow and poetic. The most humble song, just about doing something beautiful (I hope). A departure might bring sadness to leave someone you care for, a place you're attached to . . . but it brings also the joy of doing something new, going in the unknown, and a certain sense of serenity. This piece is dedicated to my younger sister, said Terrier. The album closes with The Dark Side Of Democracy, written in the style of one of Terriers heroes, Ornette Coleman.

Roundtrip is a powerfully engaging statement from a new voice on the saxophone. One that has grabbed the attention of players that represent the pinnacle of artistry on the instrument, Joe Lovano, Dave Liebman, George Garzone, Jerome Sabbagh and others.

Works of art, literature and music are often judged by how much of his/her true self the creator has put into the work. With that criteria, Roundtrip has the great potential to exceed expectations, to delight and to inspire.

Alex Terrier supports Reef Fest and will give a portion of the sales of this album to the National Fish and Wildlife Foundation. For more information or to become involved with Reef Fest, please visit www.Reeffest.org

For more information or to schedule an interview with Alex Terrier please contact: