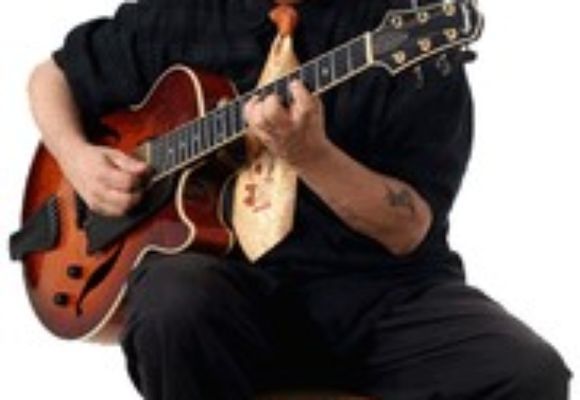 Jimmy Bruno, born July 22, 1953 in Philadelphia, Pennsylvania, is a master jazz guitarist and jazz educator. One of the most critically acclaimed jazz guitarists performing today, Jimmy Bruno came to prominence as a jazz musician in the 1990s, after a successful twenty-year career as a sought-after commercial guitarist and session musician.

Get on the bus-we leave tonight

Those were the words that began Jimmy Brunos professional career as a guitarist. Most of the other guitarists auditioning for Buddy Richs band that day in 1973 were getting drumsticks thrown at them, Buddys not-so-subtle way of showing disapproval. But not 19 year-old Jimmy; he got the gig. A Philadelphia native, he was born into a family no strangers to the music world. Jimmys father played guitar on the 1959 hit Guitar Boogie Shuffle with Frank Virtue. Jimmys mom was a gifted singer. Living in such a musical household, playing guitar 8 to 10 hours a day was normal for this south Philly kid. He studied jazz improvisation with local Philly bass legend Al Stauffer and to develop technique, taught himself to play the rigorous and exacting classical violin etudes of Wohlfahrt and Paganini. Although he briefly considered leveraging his perfect SAT scores into medical school, a summer guitar gig in Wildwood NJ changed the direction of Jimmys life forever, putting him into the path of Buddy Rich.

Jazz guitarists just dont come any better. Jimmy Bruno combines a dazzling virtuoso technique with drive and swing to produce, in concert and on record, superb and inspired lyrical improvisations.

After a whirlwind round-the-world tour as the youngest member of the Buddy Rich Orchestra, he went on to play guitar in orchestras for Frank Sinatra, Anthony Newley, Doc Severinsen, Lena Horne, and many more music icons. Additionally he spent many years as an LA session musician working with Tommy Tedesco. But his first love was always jazz, and by the time he was in his mid-thirties he was ready to come out of the background and into the spotlight. The first step was moving back East.

I was making good money, but I wasnt playing any jazz. So I got disgusted, saved some money, moved back to Philly and just decided that Im only gonna play jazz. Im not going to play weddings. Im not gonna take any bad gigs, and if I had to I would take a day gig for a while, and I did. I tended bar for 2 years. And it paid off. I wish somebody in school would have told me that. --Jimmy BrunoPaying his dues by playing blistering guitar in the small clubs and venues around his beloved Philadelphia during the 1980s, his reputation as one of the hottest guitar players grew. In 1992 he was discovered by Carl Jefferson, the founder of Concord Records and landed a multi-CD recording deal. Since then, Jimmy has recorded over 13 critically acclaimed CDs, including Sleight of Hand, Like That, and Polarity(with Joe Beck). His most recent CD Maplewood Avenue (Affiliated Artists Records) has been described as having ...a classic feel to it...like a famous album we somehow hadnt discovered yet. More recently, Jimmy is in the studio recording what will be an exclusive download-only release. Jimmy continues to perform live regularly as leader of the Jimmy Bruno Quartet in jazz venues and jazz festivals around the world.

You couldnt say Jimmy Bruno is grand or great...Hes all those. He is tops!

Jimmy has been invited to play at many major music festivals, including the JVC, Berks, Vail, and Concord Jazz Festivals, among many others. Additionally, he has collaborated with legendary and highly regarded musicians such as Joe Beck, Bobby Watson, Jack Wilkins, Tal Farlow (at Farlows 75th Birthday Concert), Howard Alden, Christian McBride, Curt Elling and many more. Jimmy was also one of an invited group of 30 guitarists chosen to play at a tribute concert for Barney Kessel and was given the honor of opening the tribute (with Howard Alden). He also has participated in tributes to jazz giants Herb Ellis and Johnny Smith.

Jimmy recently entered a third phase of his career when, in May of 2007, he opened the Jimmy Bruno Guitar Institute (JBGI). With his unique insight into jazz and jazz guitar, and employing the latest Internet and video technology, Jimmys method and no nonsense approach to jazz improvisation is now available to eager guitar students around the world.

As of mid 2008, the JBGI has surpassed expectations of enrollment by an unprecedented amount and continues to break new ground with a curriculum second to none in its breadth and depth of jazz guitar and education. JBGI offers a student the opportunity to not only take advantage of a thorough grouping of video lessons, but the opportunity to submit videoed master classes directly to Jimmy, who responds to every student submission. All of the master classes (unless preferred otherwise by the student) are available in the Student Center which permits a degree of cross-pollination in the learning process: as in any of the best classrooms.

JBGI is constantly exploring the cutting edges of technology to continue to provide a vibrant and in-depth learning experience to its students. There are 45 countries represented by an engaged student body of close to 1,500. All JBGI students have complete access to an organized and complete curriculum of lesson plans, tune analyses, supplementary lessons, and an active and vibrant forum board.

Only the JBGI student has gold plated access to First Look", the exclusive early access to Jimmys filmed live performances and exclusive downloadable audio content, as well as the Video, Photo and Audio Galleries in their entirety.

The multi-media galleries represent a rich trove, including special and unreleased live performances, interviews of Jimmy, various multi-part series highlighting the JBGI and interviews with noted and legendary guitar luthiers. So far in 2008, the JBGI has launched several multi-part series including Artist At Work ", a series that goes behind the scenes to show Jimmys creative process in action as he goes from concept to working raw mixes of a forthcoming solo release and an in-depth multiple part visit to the Sadowsky Guitar Shop hosted by Roger Sadowsky.

In response to this innovation and his long-time reputation as a jazz educator, Jimmy was invited to address the Jazz Improv Education Conference at their October 2007 gathering. Teaching thousands of guitarists around the world, and maintaining a busy performance and recording schedule, Bruno is one of the hardest working guitarists in the business.

When not on the road, Jimmy lives in Philadelphia with his wife Peg and daughter Susanna. Jimmys son is working on his PhD in linguistics at Rutgers University. Jimmy endorses Sadowsky guitars.