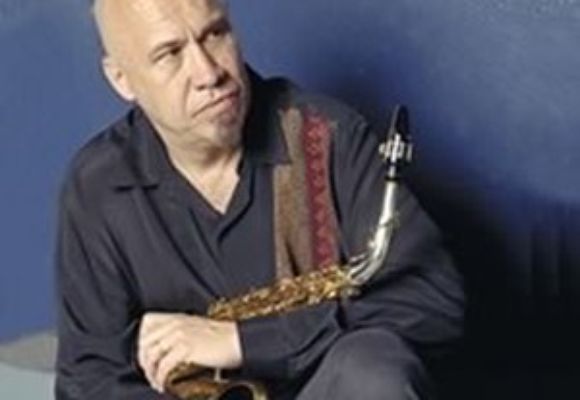 Steve Slagle was born in Los Angeles, California where he got his first saxophone and later attended Berklee College of Music in Boston on a DownBeat scholarship. Berklee is also where he met many musicians from all over the world whom he still remains close with. With his eyes on New York City, Steve moved there permanently in 1977, where he started to work with Machito and the Afro-Cuban Orchestra (lead alto) which was the band Charlie Parker and Dizzy had played with, as well as working with Lionel Hampton, Woody Herman and Cab Calloway.

But his first recordings and tours in Europe were with The Steve Kuhn Quartet, following that with a stint with organist Jack McDuff. Joining The Carla Bley Band in 1981 and touring the world a lot with her Steve also played with Charlie Hadens Liberation Music Orchestra. In 1986 he recorded with Milton Nascimento and his band in Rio de Janeiro Brazil (the album Rio Highlife named after his composition Highlife was released on Atlantic Records in 1986).  On sax and flute as well as composing and arranging  Steve became Ray Barrettos musical director in 1988 and then arranger and lead alto saxophonist with the Charles Mingus Big Band in 91, with two Grammy nominations for recording with them over that decade. He has then worked with Joe Lovano in various combinations, among them the Nonets Grammy winner 52nd Street Themes for Blue Note Records. Steve played and arranged for their second recording live at the Village Vanguard "On This Day" and their third Lovano Nonet recording for Blue Note is titled 'Streams of Expression'.

Throughout all of this while developing his own sound Steve has been composing new music and performing with his own groups. He has made five recordings for the Steeplechase label and New New York(2001) for Omnitone Records. Steve formed  the critically acclaimed Stryker/Slagle Band which he co-leads with long time partner guitarist Dave Stryker. They have made several recordings together and EVENSONG on the Panorama lable was chosen under best recordings of 2013 by Jazztimes. Steves recent duo recording 'The Power of Two' with pianist Bill O'Connell was just released also on the Panorama label and showcases his sounds on alto sax and flute.Jazziz magazine said of this recording-"Steve is an impassioned improviser with total contol of his Horn"

A member of BMI, Steves publishing company - Slagle Music - has a long list of original compositions. His sax quartets are published by Advance Music and Mingus Big Band arrangements are published by Hal Leonard as well as currently played by the MBB.His book on improvisation and composing.'Scenes ,Songs & Solos'was published by Schaffner in 2013.

Steve is a long time faculty member at the prestigious Manhattan School of Music (MSM) as well as Berkeley College and is also a clinician and performer worldwide.Presently Steve is working on four horn arrangements for his upcoming expanded Stryker/Slagle Band  recording 'Routes' for the Strikezone Label.