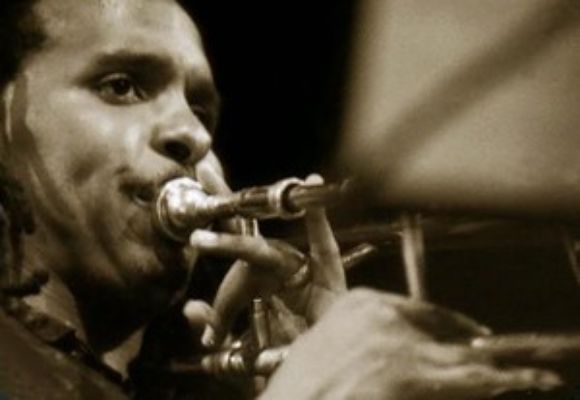 All that I can really say about myself is that I am one of the few people in the world that has been blessed enough to live a dream. I am allowed by the Good Lord above to make a living doing what I was put here on this earth to do, and love to do above all things: Play Jazz Music. Sure, I have worked at it, practiced, and struggled with it and for it (and still do all of those things), but we all know that that alone doesnt guarantee success. Think about all of the geniuses that have died alone, poor, and without recognition of their greatness, not that I am great or a genius by any means. I was born in Chicago in 1972, but my parents weren't feeling the south side, so we moved to Virginia, where I was raised. Both my parents are music educators and performing musicians, so it was always part of my life. I played football and ran track in High School, but by the time I was about to graduate, Jazz music had taken a hold of me. I went to college at Florida A&M University, marched in the INCOMPORABLE Marching "100"(Hubba Doc!), transferred to the University of North Florida (where I was lucky enough to meet and occasionally shed with the INCOMPORABLE Bunky Green), and graduated from UNF in 1996. While in Florida, I worked at the various Florida Theme Parks to make some bread (Busch Gardens, Disney, etc.) and I met Mercer Ellington, who gave me my first gig outside of Florida. After I graduated, I moved to Brooklyn to pursue Jazz. It just made sense. If you want to play Jazz, go where the baddest jazz musicians are. I've been in the New York area ever since and have had the chance to play just about every kind of music there is with most of the baddest musicians that there are. I was on the road with Lauren Hill in 1999 (when "The Miseducation" came out), and in 2000 I joined Wynton Marsalis and the Lincoln Center Jazz Orchestra. Along the way, I 've had a chance to play with people like: The Duke Ellington Orchestra, Bobby McFerrin, The Count Basie Orchestra, Frank Foster, The Glenn Miller Orchestra, Chaka Kahn, A Tribe Called Quest, Common, Outkast, Nancy Wilson, McCoy Tyner, Nicholas Payton, Illinois Jacquet, Tommy Flanagan, Marcus Roberts, Matchbox 20, Jimmy Heath, and others. Aside from the many recordings that I have been on as a sideman, I have recorded 3 albums as a leader for SteepleChase records to date. The first one "Elbow Room" was released in 2006. My Second One, "The Good Book, CH 1" was released in April 2007.The Latest one, "Vin-Slidin," will be released in the Spring of 2008. Anyway, that's me. I love all good music, but I love to PLAY Jazz. I'm out here, Swingin...... ..