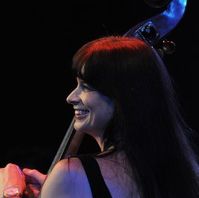 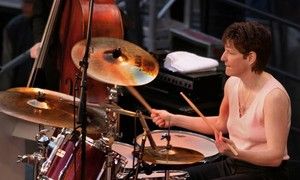 08/16/2010
Smalls
The Sherrie Maricle Trio
Upcoming Shows
Jennifer Jane LeithamÒThe world that Leitham has moved in since the early Õ80s has been at the center of the highest levels of jazz performance. More than 100 recordings as an A-list bassist, seven CDs of her own and appearances with the likes of Gerry Mulligan, Joe Pass, Louis Bellson, Bill Watrous, Cleo Laine and dozens of others, as well as long-term stints with Mel Torm}, Doc Severinsen and the Woody Herman Thundering Herd attest to the far-ranging versatility of her playingÓ. JazzTimes, 2009 - Don Heckman.Jennifer has been a featured artist at at many of the worldÕs most prestigious jazz festivals and clubs. In the last year she has appeared with her trio at some of the fines öt Jazz clubs in the world, including The Blue Note and DizzyÕs Club Coca Cola in New York, The Jazz Bakery and CatalinaÕs in Los Angeles, Blues Alley in Washington DC, and The Deer Head Inn in the Delaware Water Gap. In addition to her highly regarded career as a performer, she is also a sought after clinician, guest soloist and lecturer by some of the most respected Universities and colleges in the United States. Since 2007, Jennifer has been a vital member of the jazz faculty at California State University Long Beach and recently opened a private teaching studio in New York City. Whether fronting her trio or her quintet, Jennifer has been an admired bandleader and a unique, creative musical force. JenniferÕs most recent CD, the critically a cclaimed Left Coast Story (2008), is a collection of requests from her loyal fans. Her premier trio CD The Real Me (2006) is a reflection of her passion for the medium of Òclassic jazz trioÓ. However, this Òclassic trioÓ features the bass as the lead voice throughout and highlights both JenniferÕs original compositions and vocal debut. LeithamÕs other internationally renowned CD's include Two for the Road (1999), Live (1997) Lefty Leaps In (1996) The Southpaw (1992) and Leitham Up (1988). Here is what the critics are saying about Jennifer : "As a soloist, Leitham is in a class by herself. At the core of her powers are a rich plummy sound, an astonishing virtuosity, unerring intonation and a deep sense of swing. LeithamÕs trio, to borrow from the argot of rock, is a power g roup extraordinaire." - Topeka Capitol Journal 2009, Chuck BergÒ...prodigious technique and improvisatory prowess promptly erase any emotion except awe." 52nd St. Jazz, Robert BragonierÒ...a unique level.......to effortlessly improvise with imagination, incredible skill and even a bit of humor." JazzTimes, Jim Ferguson"Combining her astonishing virtuosity with some exquisite soul, Jennifer Leitham brings in her trio to celebrate the success of her latest album, The Real Me. She, (and her trio), make an organic whole that is really something live ... and something that all kinds of fans get into." LA Weekly, Brick WahlÒLeft Handed virtuoso of the upright bass.Ó L.A. Times, Leonard Feather Website: www.jenniferleitham.com