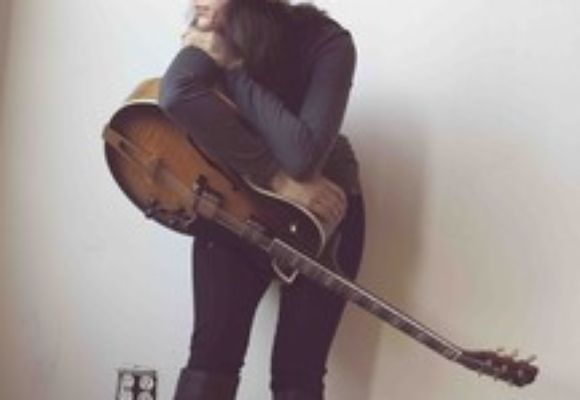 At the young age of 22 guitarist Dida Pelled has already established herself as one of the most in demand musicians in Israel, aside from leading her own trio, dida has worked with various jazz combos as well as some of Israels most popular rock and pop acts, performing at high profile venues such as the givataim theater, the guitar festival in the south, shablul jazz club, Milestone jazz club and more.

After graduating from the prestigious Jazz department of the Thelma Yellin high School in Tel Aviv Dida was chosen by the Israeli Army to serve as an outstanding musician and spent two years traveling the country playing in high profile events where she functioned as the guitarist and vocalist of the group.

Once released from the Army Dida set up her mind to relocate to the USA in peruse of her musical carrier. Dida received a full scholarship from the Berkley collage of music in Boston and a scholarship from the New School University in NY City where she is studying these days. Dida is a recipient of the prestigious AICF scholarship.

In the short time spent in NY Dida has already played at some of New Yorks most prestigious Jazz clubs such as the famous Bird Land, Smalls Jazz Club, Fat Cat jazz club, Dizzy's Jazz Club at Lincoln center, the mythological Arturos and other notable Jazz landmarks.

After less then one year in New York Dida has recorded her First Album- to the Italin label - Red records. produces by Fabio Morgera- and played with Dida as guitarist and vocalist joined by Tal Ronen - Bass, Gregory hutchinson- Drums and Roy Hargrove as Special guest.

A few months after moving to New York, Dida recorded another album with The Diva Jazz Orchestra playing Johnny Mandel's music. The album was recorded live at Dizzy's Jazz club at Lincoln Center

"Pelled's warm voice possesses an emotive quality that's simultaneously soothing and intoxicating, and her guitar playing, which is built on her round sound, strong comping skills and soulful single note solo lines, places her in a category all her own". (All About Jazz)

"Dida Pelled sings and plays with equal skill, and her one of kind soundsteeped in tradition while residing deep in a dreammark her as an artist deserving greater attention"

"With 10 fingers that are wise beyond their 21 years, Pelled is the jazzbo guitar slinger that Emily Remler should have been."

"Rounding things out with a pomo Betty Boop voice that easily matches her cutie pie face, she is a jazz promoters dream. A red ribbon package throughout, Pelled is one of the brightest new stars on the jazz horizon. Hot stuff." (Midwest Record)

"Dida plays jazz by candlelight with a snifter of smooth, fragrant Cognac, taking you back to that electricity-in-the-air feeling of a first date." (Guitar instructor)

"Pelled's voice and guitar tone complement each other in their simplicity and warmth. Playfully sexy and intelligent, Pelled's talent exists as a complete package, perfectly capable of solo performance, but clearly benefiting from the company. " (All About Jazz)