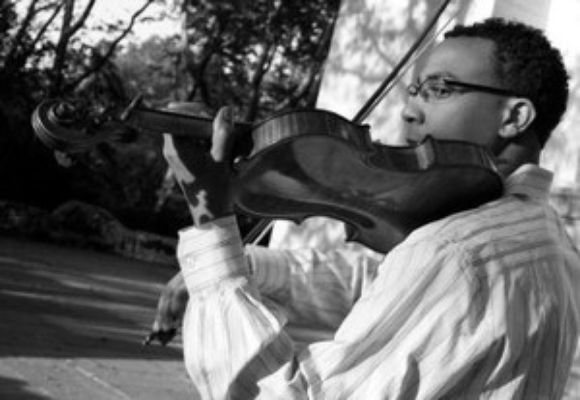 Majid Khaliq is a violinist and composer cut from a different cloth. He has been described by legendary musician Wynton Marsalis as having "a unique blend of improvisation, groove and technical sophistication." Although classically trained, Mr. Khaliq's passion and musical palette ranges from the roots of American jazz music to the greats of the Progressive jazz scene. He is quickly establishing himself as a rising talent in the world of jazz.

As a young boy growing up in the New York area, Mr. Khaliq demonstrated a serious interest in the recordings of Duke Ellington featuring Ray Nance on violin that he heard his father playing at home. At the age of five, his mother enrolled him in violin lessons. From that point on, music has provided Mr. Khaliq with the opportunity to play in some of the world's most acclaimed educational institutions and concert halls. In 2002, Mr. Khaliq graduated from the Juilliard School with a Bachelor of Music and in 2010 with a Master of Arts in Jazz Performance from Queens College's Aaron Copland School of Music.

Composition and arranging are also talents that Mr. Khaliq has worked to refine for many years. In 2008, Mr. Khaliq was the recipient of the prestigious Meet the Composer's Edward and Sally Van Lier Fellowship Award for his work in composition.

In the fall of 2010 he will release, The Basilisk, his greatly anticipated debut CD recording. The music on this record comes from an eclectic blend of styles. Influences from European classical form to the freedom of hip-hop are explored with flare and swagger. The Basilisk is a compilation of compositions that are intense, colorful and specifically tailored to allow the violin to be played with classic lyricism and cuttingedge expressionism. It is truly the next step in the evolution of jazz.