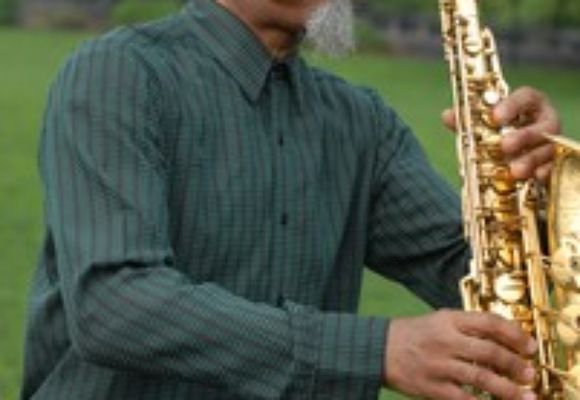 Born in Colon, Panama attended the Panama Conservatory of Music and the University of Panama. He received a Bachelor of Science in Music from the State University of New York College at New Paltz in 1981. A unique innovator in the idiom of creative music, Sylvester’s sound is reminiscent of another time in jazz history when artists like Dolphy and Ornette were exploding on the scene and experimenting with concepts that would ultimately revolutionize music at large. A throwback to the future, Mr. Sylvester has been on the cutting edge of that scene since 1980 when he first came to New York City. His blend of African-Caribbean rhythms with new music is what gives Sylvester his distinguished voice.

An impressive composer and arranger, his music moves, entices and stirs the imagination, as visceral as it is visual, his ability to transform colors into sounds and sounds into textures place him in the company of the great expressionist painters.

Beginning his professional career at age 14, Jorge was leading his own Caribbean dance band, writing his own arrangements and compositions. He studied privately with renowned Panamanian jazz saxophonist, Euclides Hall, who took him along on gigs to observe from the bandstand in the “old school style”. When Jorge’s professor at the conservatory, Efrain Castro, sent him to sub for him in a band led by the great Panamanian pianist Victor Boa, Jorge was taken on as a regular.

Heading for Europe in his early twenties, Sylvester spent ten years touring and recording with his ensembles and freelancing throughout Europe. In 1979 he studied advanced harmony with Argentinean pianist, composer Luis Vecchio in Las Palmas de Gran Canarias, Spain. It was during this period that Mr. Sylvester began to explore free jazz by playing and recording with the Luis Vecchio Quartet.

Upon his arrival to New York in 1980, he studied with Dave Holland, Oliver Lake, Steve Lacy, Ramsey Ameen, Marion Brown and many others at vibraphonist Karl Berger’s Creative Music Studio in Woodstock. Since that time, Sylvester has performed with:

Stefon Harris, Rodney Kendrick, Karl Berger, the David Murray Big Band, poet Sekou Sundiata, the Black Rock Coalition Orchestra, the Oliver Lake Big Band, Kuumba Frank Lacy’s Vibe Tribe, the Next Legacy Orchestra, Joe Bowie’s Defunkt Big Band and Nora McCarthy who is a member of his group The ACE (Afro-Caribbean Experimental) Collective and with whom he also co-leads several groups, namely: The ConceptualMotion Orchestra and A Small Dream In Red (voice and saxophone duet) a CD by the same name was released on the Sundown label in March, 2003.

The ConceptualMotion Orchestra, conducted and orchestrated by Sylvester, is a 20-piece all original music orchestra with compositions contributed by both he and McCarthy, opened the renowned avant garde VISION FESTIVAL X in New York City, June, 2005.

In January, 2007, Mr. Sylvester returned to his native Panama as a member of the Panamanian All-Stars led and directed by pianist Danilo Perez at the fourth annual Panama Jazz Festival performing with Carlos Garnett, Santi Debriano, Billy Cobham and Renato Thoms.

In the Spring of 2007 he performed a series of workshops and a concert in Podgorica, Montenegro with A Small Dream in Red for Jazz Appreciation Month and appeared on the television show, Good Morning Montenegro.

In December 2010, Jorge Sylvester ACE Collective performed in concert for an enthusiastic capacity filled audience the illustrious, Brucknerhaus in Linz, Austria and recorded the music for their new release Spirit Driven several days afterward in Hagenberg.

This CD is a continuation of the ACE Trio CD "In the Ear of the Beholder"An exploration from within of the Afro Caribbean Rhythms as a rhythmic and melodic vehicle to create new forms of extended compositions using the Voice, the Trumpet and the Piano as 3 independent textures to the ACE Trio.

Spirit Driven is a highly rhythmic and spiritually motivated compositional journey through the various cultures that make up the Caribbean Islands encompassing their significance and contribution to the present day advanced musical concepts in jazz and avant-garde/free music. The music is original, modern, imaginative and experimental. The use of language, “word,” in the form of poetry and lyrics is throughout and used to convey each song’s spiritual and historical message.

The CD includes a composition dedicated to Haiti.

• In the language of dreams - a tribute to Ornette Coleman and Wassily Kandinsky with A Small Dream In Red, minimalist innovative voice and saxophone duo, Nora McCarthy—voice, Bodhran; Jorge Sylvester—alto saxophone.

A powerfully artistic CD comprised of original compositions, poetry and improvisation as well interpretations of five of Kandinsky's masterpieces graphically and spontaneously composed in the moment. There are also several covers of choice music which includes two Ornette Coleman compositions with lyrics written by McCarthy.

The duo employs various techniques they discovered working in this format as well as other techniques employed by all art forms. Deconstruction, diminution, expansion, elaboration, symbolism, line and design among others. Intuitive and symbiotic, the two altos enter into each work with absolute freedom from preconception and create within and outside the form the textural content of each piece.

• The quartet Asymmetry with pianist, Lucian Ban, Sylvester recorded a CD for Jazzaway records which was released in December, 2005 entitled “Playground” which is also the name of the title track a composition written by Sylvester.

• In The Ear of the Beholder, 2001 (Billboard’s Spotlight, Feb. 2001) Jazz Magnet Records, features: Donald Nicks on electric bass and Bobby Sanabria on drums and is Sylvester’s second release as a leader.

• In 1999 Jorge Sylvester appeared on BET Jazz “Live from the Knitting Factory,” with his group, The ACE Trio.

Those who were expecting Calypso-singing Harry Belafonte clones must have been disappointed. The pieces composed by the Panamanian saxophonist use the rhythmic tradition as a basis for extended forays into the world of the contemporary. The young drummer Kenneth Grohowsky juggled the odd meters with exquisite ease. Sylvester's compositions are solid ground for exciting, improvisational excursions particularly by the singer and poet Nora McCarthy and the trumpeter Waldron Mahdi Ricks. The music could most readily be compared to Steve Coleman's Five Elements who made a big impression in St. Magdalena in October. In the next days the ACE Collective will record their new CD at Peter Guschlbauer's studio in Hagenberg. You have to look forward to that.

“...Jorge Sylvester's distinctive alto saxophone sound is imbued with the volatility of Caribbean basin's complex mosaic, transformed and focused by the probing musical linguistics pioneered by the great saxophonists of modern jazz. Jorge's composer's imagination is the matchless structural coherence of his improvisational work.”

“...If Ornette Coleman had be born and reared in Nassau, his music would have sounded like this.”

C. Michael Bailey - All about Jazz

“ Sylvester's alto work is deeply rooted in bebop but fluent in the most modern of horn vocabularies. With this album, (In The Ear Of The Beholder) he makes his mark as one of the more advanced, imaginative voices in Afro-Caribbean jazz.”

‘In The Ear Of The Beholder’, bespeaks variety in the form, with each track opening up a different vista.

“...There are no clichéd romantic notions of breezy island music on this bold adventure led by Panamanian alto saxophonist Jorge Sylvester. With his edgy rhythmic pulse and diamond-hard tone, Sylvester has crafted an album that boasts the same sort of Herculean, calypso-driven improvisations of Sonny Rollins and the lofty intentions of Julius Hemphill and Oliver Lake's 1970s Arista Freedom dates.”

John Murph, Jazz Times Magazine Review of In The Ear of The Beholder“.

..As for Sylvester, he’s one the most capable soloists holding an alto today–"Por la Clave," for instance, is full of outright Ornette-ish inflections with ample support once again from the rhythm section. There are several gutbucket textures here that evoke the wailing harmonic breadth of some of jazz’s best improvisers, from Eric Dolphy to Sonny Simmons. It’s a restrained but flawless stream of emotive improvising and it heralds one of the greater under looked talents of the day. Jorge we never knew ye!”

“...Sylvester chose McCarthy’s voice because of its similarity in sound and spirit to the horn and for her versatility within the context of the instrumentation of the Collective as well as for her unique improvisational and interpretative abilities.”

Ramsey Ameen, A Gathering of the Tribes Magazine