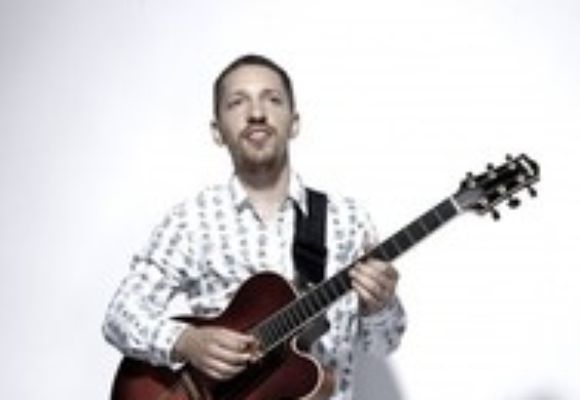 Libor `moldas was born in 1982 in Olomouc in the Czech Republic, but has lived in Prague since his childhood. He has been an avid musician since his early youth, starting with the recorder and trumpet, and picking up the guitar at the age of twelve. After initial forays into rock and blues he began to take an interest in jazz, mainly due to his fascination with the recordings of Charlie Parker.

While still a student of the Evropská High School of Music he began to appear in jazz clubs and bars all around Prague with American blues singer Phil Speat, as well as at the traditional Sunday jam sessions in the popular club U Malého Glena, one of the cradles of the up-and-coming generation of Czech jazz musicians. Before beginning his conservatory studies he studied guitar with Josef Kostka, Luboa Andrat, Zdenk Fiaer and Petr Zelenka.

In 2001 he entered the Jaroslav Je~ek Conservatory of Jazz and Popular Music, studying in the jazz guitar department under JiYí `indler. Two years later he was accepted into its newly opened Advanced Secondary Studies department, where his teachers were Peter Binder, Josef `tpánek and David Doro~ka. His classmates included Jakub Dole~al, Daniel `oltis, Rastislav Uhrík, Vojtch Procházka, Oskar Török, Roman Vícha, OndYej Pivec and other leading personalities of the younger generation of Czech jazzmen. After graduating, he himself began to teach guitar, rhythm and ensemble performance there.

In 2005 he went to Freiburg, Germany to audition for a scholarship to the prestigious Berklee School of Music. Although he was awarded a scholarship, he decided to remain in Prague. His US experience would come a few years later when he studied under leading jazz guitarists Paul Bollenback, Lage Lund, Mike Moreno, Ben Monder, Steve Cardenas and Peter Bernstein during his trips to New York in 2009.

`moldas has been a permanent fixture on the Prague jazz scene since his conservatory days when he performed not only with his classmates, but also with such outstanding artists as NajPonk, Jaromír Honzák, Radek Zapadlo and JiYí Slaví

ek. He also played with Polish-Cuban singer Yvonne Sanchez and her band Brazilian Mood, opening for Billy Cobham on a tour through Turkey and Cyprus.

His friendship with hammondist and conservatory classmate OndYej Pivec led to the 2005 founding of Organic Quartet with drummer Tomáa Hobzek and saxophonist Jakub Dole~al. The band¼s first album Don¼t Get Ideas (Cube-Metier, 2006) earnedvery positive reviews both at home and abroad, as well as the Czech Academy of Popular Music¼s Andl award for Best Jazz Album of the Year. Shortly thereafter the quartet began to perform on festival stages throughout Europe (Cheltenham, Sibiu, Kishinev, Prague Autumn, Paris, Athens, Sophia), toured China, and won a number of awards, including the Audience Choice award at Getxo, 1st Place at the Phillips Jazz Prague festival and Straubing jazz festival. Their second album, Never Enough (Animal Music, 2007) was also a huge success, and Organic Quartet became one of the most respected jazz groups in the Czech Republic. Frontman OndYej Pivec is currently living in New York, returning to the Czech Republic occasionally to tour with the quartet.

The Libor `moldas Trio, founded in 2006, played mostly `moldas¼ own works. The evolving membership included Daniel `oltis, Rastislav Uhrík, Tomáa Baroa, Martin Novák, and in its final form, OndYej Pivec and leading Polish drummer Aukasz {yta, with whom `moldas recorded his debut album On the Playground (Animal Music, 2007). The album, which contains six of `moldas¼ original compositions and two jazz standards, successfully combines traditional and modern approaches to jazz, and generated a lot of excitement with the Czech public and critics alike. Among the trio¼s other notable successes were performances at the prestigious Young Prague festival (2007) and in the Jazz At the Rudolfinum concert (2009), which featured `moldas¼ arrangement of his Lydian Blues for the trio and the Prague Philharmonia chamber orchestra. World-renowned drummer Jeff Ballard made a guest appearance with the band at a Prague Summer Jazz Workshop concert, and the trio also accompanied American trumpeter Bob Montgomery and British trumpeter Steve Fischwick at their Prague concerts.

Another of `moldas¼ current projects is the band of his wife, Vendula `moldasová (stage name Zeurítia), focusing primarily on bossa nova repertoire, with an emphasis on authentic interpretation of the Brazilian music and Portuguese texts. Her eponymous debut album, produced by `moldas and released on the Animal Music label in 2008 was recorded with extraordinary Polish musicians MichaB Tokaj (piano) and MichaB BaraDski (bass). The album was christened by top Polish singer Aga Zaryan, who also performed with Zeuritia at the release party, and is currently one of the most popular jazz albums in the Czech Republic today.

`moldas is currently performing with his quartet featuring Josef Fe

o on bass, Tomáa Hobzek on drums, and Petr Benea on piano. The quartet¼s repertoire consists of original compositions by `moldas. The live CD entitled Live at Jazz Dock is going to be out in November 2010. The band decided to let it for free, so everybody can downloaded on the internet.

His greatest success to date, however, is the recording of In New York On Time, an album which he recorded in the summer of 2009 with some of the world¼s best jazz players, including bassist George Mraz, drummer Jeff Ballard and pianist Sam Yahel. The album was released in early 2010 to overwhelmingly positive reviews in the Czech and international press. (The All About Jazz review is included below.) At the age of 27, `moldas thus became the only jazzman in the Czech Republic to have recorded with jazz stars of this calibre.

Aside from his activities as a performer and teacher, `moldas is also an active member of the board of the Czech Jazz Association, which promotes the general development of jazz in the Czech Republic through its annual Summer Jazz Workshop, Junior Jazz competition for young bands, and informational website www.czechjazz.org.

in 2010 Libor teached at the Summer Jazz Workshop in Prague and gave lectures about rhythm and creative improvisation.

Twenty eight year old guitarist, composer, Andl winner and conservatory professor Libor `moldas thus ranks among the stars of the Czech jazz scene in spite of his youth. He plays and records with the international stars of the jazz world and is widely considered to be one of the best jazz guitarists in the country.