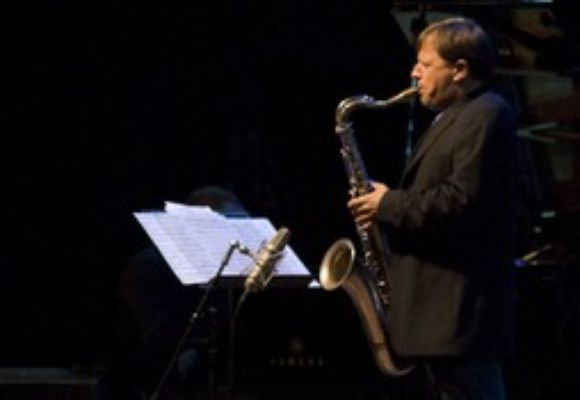 Born in Chicago on New Years Day 1971 and moving to Columbia, South Carolina as an infant, the prodigious youngster began fooling around on guitar and piano at the age of three. He took up the alto sax at the age of ten and played on his first jazz gig at the age of 13. But his eclectic musical education really began with his personal investigation of his parents record collection. Spanning everything from Bach to Schoenberg, and gamelan music to the Beatles, Chris explored it all avidly, taking a special interest in albums by Miles Davis and Dave Brubeck.

When piano legend Marian McPartland first heard Chris at 15 years old (an encounter that eventually led to his contract with Concord Records in 1994), she told his father that Chris was ready for the road with a unit such as Woody Hermans. But finishing school was a priority and by the time he graduated, he was playing alto, tenor and soprano saxophone, bass clarinet and alto flute.

At 18 Potter moved to New York to study at the New School, and then Manhattan School of Music. There he formed a lasting friendship with one of his professors, pianist Kenny Werner, later making a duet recording together. He also re-connected with trumpet great Red Rodney, with whom he had played earlier at a jazz festival in Columbia. He spent four important years with Rodney, honing his skills at the side of the bebop heavyweight, until shortly before Reds passing in 1994.

After playing on Marian McPartlands 1993 Concord recording, In My Life, the adventurous saxophonist became a surprising member of the Concord roster, eventually recording five CDs for the label, as well as the aforementioned duo with Werner. His final Concord CD, 1998s Vertigo, was named one of the years top ten CDs by both Jazziz and The New York Times.

Chris also performed on Steely Dans Grammy-nominated, gold album Two Against Nature, touring with them in 1994, which also resulted in the live CD, Alive in America.

Potter received his own Grammy nomination for Best Instrumental Jazz Solo for his work on Joanne Brackeens Pink Elephant Magic. And hes the youngest recipient ever to receive the annual Danish Jazzpar Prize.

Although hes performed extensively with the incredible bassist/composer Dave Hollands various ensembles, Potter has been performing all over the world with his own groups since the release of Gratitude early 2001. He has performed all over Europe (including Paris, London, Florence and the North Sea Festival), Canada (festivals in Montreal, Toronto and Vancouver) and in top clubs in the U.S. as well as a featured performance at the Monterey Jazz Festival.

Following a European tour with Steve Swallows Trio in December 2001, Potter recorded Traveling Mercies in January, 2002, before taking his quartet out on a West Coast tour in February. In March and April, he toured the U.S. with Hollands and Dave Douglas quintets respectively, and in the fall, he began his extensive touring with his own group, working throughout the U.S. in September and October, and in Europe during November and December.

Multi-reedman/composer Chris Potter is often cited by critics, musicians, and a steadily increasing number of fans as the finest saxophonist of his generation. Like most young jazz musicians, Chris is well schooled in the masters. His critically acclaimed 2001 album, Gratitude (Verve) pays tribute to many of those titans whove influenced him, including John Coltrane, Sonny Rollins, Joe Henderson, Eddie Harris, Wayne Shorter, Lester Young, Coleman Hawkins, Ornette Coleman and Charlie Parker.

But like many other of his contemporaries in and out of jazz, Chris musical influences come from many and varied sources.

My aesthetic is based in Bird and Lester Young and Sonny [Rollins]. I want my music to have that emotional impact. What I learned from them in terms of phrasing, sound, approach to rhythm will never be outdated. I would like to basically use the same aesthetic sensibility with more contemporary harmonic and rhythmic concepts, being influenced by classical, world music, funk, rock, rap, country, whatever...digesting new ideas, new influences to keep the freshness alive.

Along with limitless creativity, a vibrant sense of swing, and a full awareness of past, present and future, that broad-based musical sensibility has brought Chris into the line of vision of a diverse and heady array of artists, including James Moody, Jim Hall, Marian McPartland, Dave Douglas, Larry Carlton, Steely Dan, and Dave Holland, with whom Chris has been performing regularly since 1999.

Each band leader, each great musician Ive had the chance to work with has inspired me in a certain way...Without all those experiences I dont think Id be ready to be doing this now.

The this to which he refers, is leading his own ensemble, an endeavor that has been consistently bringing him greater acclaim and new fans all over the world. An unabashedly rhythmic player, Chris most recent CD Traveling Mercies, his second for Verve, is a groove-oriented date that makes no sacrifices or compromises in the quest for musical integrity and communication with his audience.

I want people to dance if they can, to feel the music and not think of it as something complicated and forbidding. I want to be communicating something. You can do that and not sacrifice anything artistically.