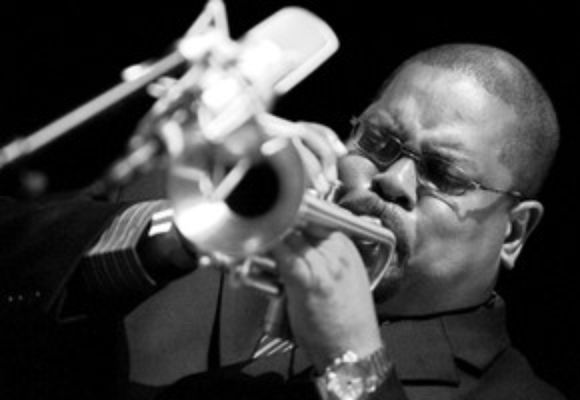 Jazz trumpeter, Derrick Gardner, inspired by the finest hard-blowing funky bop bands of the 1960s, is working to extend that great tradition as a composer, arranger, performer, leader and educator.With extraordinary, creative natural talent, Derrick quickly made his mark upon arriving on the New York jazz scene in 1991. There he began a top-flight career that has taken him around the world performing internationally with the Count Basie Orchestra, (1991-present), Frank Fosters Loud Minority Band, Harry Connick Jr.s Big Band, The Smithsonian Jazz Masterworks Orchestra and Swiss tenor player Roman Schwallers European Sextet. Among his performance locales are Europe, Scandinavia, Russia, Japan, South Africa and Thailand as well as many premiere venues in the United States. Over the last 18 years Derrick has worked with a tremendous litany of artists that include late Dizzy Gillespie, George Benson, Frank Foster, Jon Faddis, Nancy Wilson, Tony Bennett, Joe Williams, Rufus Reid and Clark Terry just to name a few.Mr. Gardner formed his own sextet, The Jazz Prophets, in 1991; it continues to be the primary vehicle of his distinctive, hard-driving music. The bands three-man horn line, consisting of himself, tenor sax player Rob Dixon and Derricks brother, trombonist Vincent Gardner of the Lincoln Center Jazz Orchestra, has been together since the beginning. Derricks recording by The Jazz Prophets, A Ride to the Other Side, marked his Owl Studios debut in the spring of 2008. Like Slim Goodie (his highly regarded first recording as a leader on his own Impact Jazz imprint in 2005) it boils with the long-standing collectives sheer passion for the soulful, funky jazz sound for which Cannonball Adderly and Horace Silver built solid foundations with their 1950s and 60s ensembles. The Prophets take that traditional straight ahead sound into new, invigorating territory.Derrick Gardner & the Jazz Prophets second release on Owl Studios, Echoes of Ethnicity, was heralded with rave reviews and received the honor of being awarded Best Jazz Album of the Year by the Independent Music Awards. Echoes of Ethnicity is a solid, dynamic collection of excellence that highlights the deep talent and professional sound being produced by this hard-driving group.In addition to his own releases, Derrick has performed on multiple recordings with the Count Basie Orchestra (including Grammy-winning The Count Basie Orchestra Live at Manchester Craftmans Guild), the New York Voices in 1997 and four sessions with Harry Connick Jr. including 2007s Hurricane Katrina inspired Oh, My Nola. In addition to recording and touring with the Harry Connick Jr. Big Band (an affiliation that continues as his schedule permits) Derrick was the feature trumpet soloist in the Broadway musical Thou Shalt Not, for which

Connick wrote the music and lyrics. As a sideman, Derrick has been on numerous recordings by arranging mentor and close friend Frank Foster, Carlos Garnett, Stefon Harris, Roman Schwaller and Liz Wright, among others.