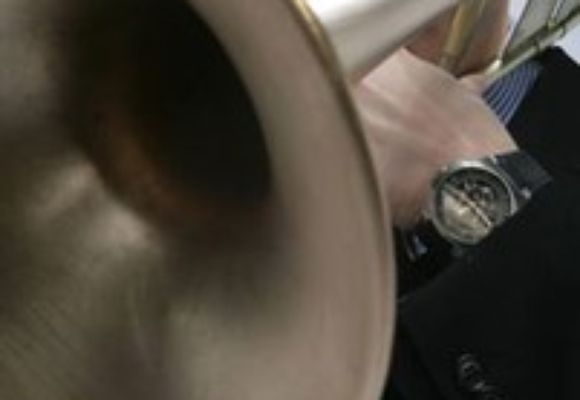 Elliot Mason (Trombone), born in England on January 13, 1977, began trumpet lessons with his father at age four and at age seven, took up the piano. However, struck with an overwhelming curiosity in his fathers trombone, young Mason soon switched his focus from the trumpet.

As an eleven-year-old, Mason was already performing as a trombonist in dance halls, theaters, clubs, and pubs, covering all styles of music but concentrating primarily on jazz and improvisation. In 1992, at fifteen, he won the national Daily Telegraph Young Jazz Soloist (under 25) Award and was featured at John Dankworth's Wavendon Jazz School. Entering alternate age categories the next year, Elliot and his brother Brad, as the Mason Brothers, won the national competition a second time and by age sixteen, Mason left England to join his brother at the Berklee College of Music in Massachusetts on a full tuition scholarship where he met and studied with Hal Crook and Phil Wilson, among others.

In 1994, Mason won the prestigious Frank Rosolino Award for outstanding trombone performance abilities, and was invited to perform at the International Trombone Workshop. At eighteen, he won the ITW 's Under 29 Jazz Trombone competition, as well as the Slide Hampton Award in recognition of outstanding performance abilities from Berklee. After graduating from Berklee in 1996, Mason moved to New York City, where he distinguished himself as a respected and highly in demand trombone and bass trumpet player.

In 2007, Elliot Mason was invited to become a member of the Jazz at Lincoln Center Orchestra directed by Wynton Marsalis. While a permanent performer with JLCO, Mason continues to co-lead the Mason Brothers Band with his brother, Brad.