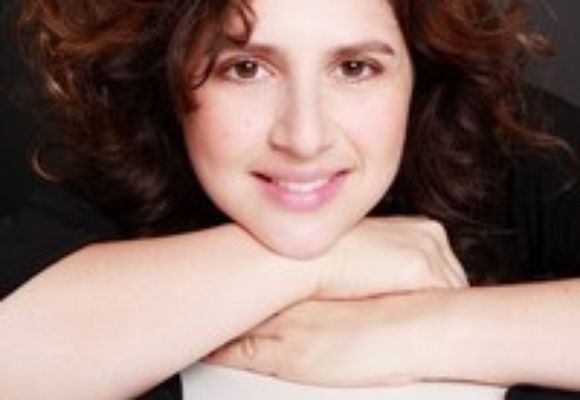 Idiomatically conversant with modern and traditional jazz, classical music, Brazilian choro, Argentine tango, and an expansive timeline of Afro-Cuban styles, Anat Cohen has established herself as one of the primary voices of her generation on both the tenor saxophone and clarinet since arriving in New York in 1998.

Born in Tel Aviv, Israel, Anat grew up with musical siblings; her older brother, Yuval, is himself a saxophonist of note, and her younger brother, Avishai, is one of New York's busiest trumpeters. She began clarinet studies at age 12 and played jazz on clarinet for the first time in her Jaffa conservatory's Dixieland band. At 16 she joined the school's big band and learned to play the tenor saxophone. The same year, Anat entered the prestigious Thelma Yelin High School for the Arts, where she majored in jazz. After graduation, she discharged her mandatory Israeli military service duty from 1993-95, playing tenor saxophone in the Israeli Air Force band. In 1996, Anat headed to Boston to matriculate at Berklee College of Music. There she met faculty member Phil Wilson, who encouraged her to play clarinet, other inspiring teachers such as Greg Hopkins, Ed Tomassi, Hal Crook, George Garzone, and Bill Pierce, and an elite international peer group of students. Berklee was crucial to my development as a musician says Anat. I was veryclosed-minded when I got there. I just wanted to play Coltrane, to play jazz; I didn't think of world music at all. Since Berklee gives scholarships to musicians from all over the world the student body ends up being very diverse. I met many people who played music from their own country and I came to understand when a chart says Latin' on top it means almost nothing. You need to know if the music is from the northeast of Brazil, the west coast of Colombia, or someplace else on the continent. I was inspired to explore world music, starting with the music of South America, in detail. During her Berklee years, Anat visited New York during breaks between semesters, making a beeline for Smalls to soak up the hybrid of grooves, world music and mainstream jazz that people like Jason Lindner and Omer Avitala high school bandmate of her older brotherwere then evolving. Back in Boston, she played tenor saxophone in a variety of musical contexts; Afro Cuban music with Ecuadorian bassist Alex Alvear in a group called Mango Blue, Argentinean and original music with pianist Pablo Ablanedo, and klezmer music at weddings. Called by Brazilian bassist Leonardo Cioglia for Brazilian Popular Music gigs, Anat learned selections from the songbooks of Ivan Lins, Milton Nascimento, and Toninho Horta, and studied Brazilian percussion to master the associated rhythms. The group evolved into an instrumental quartet that gigged weekly. After Cioglia left for New York, jobs with Fernando Brandao, a Brazilian flutist, provided Anat with more opportunities to play Brazilian music and exposed her to choro, a particularly challenging Brazilian musical genre, for the first time. Once ensconced in New York, Anat quickly found work in various Brazilian ensembles, including a gig with the high-octane pop band Brazooca at the Café Wha in Greenwich Village. One night there I met Pedro Ramos, she recalls, referring to the tenor guitarist and cavaquinho player who had recently organized the Choro Ensemble, He showed up at my house the next day with songs for me to learn for a demo CD he was set to make the following week. When we started to play the music, I fell in love with it, and it immediately rekindled my desire to play clarinet. Choro employs classical European harmonic progressions and demands a classical approach to technique on the instrument. It offers the alegria (happiness) of the samba, nostalgia, saudade (longing), groove, and high energy. It requires constant interaction and allows for improvisation. It has all the important elements I think great music should have, and requires true dedication to learn to play it authentically. It has been the mainstay of my clarinet playing for the last seven years.

In addition to The Choro Ensemble, Anat plays with New York Samba Jazz, a modernist quintet led by Brazilian drum master Duduka Da Fonseca, and with her brothers as The Three Cohens. She has long held the lead tenor saxophone chair in Sherrie Maricle's Diva Jazz Orchestra, the top shelf allwoman big band, with which she has toured the world. Since 2004, she has played the music of Louis Armstrong with David Ostwald's Gully Low Jazz Band. She has explored the music of Bix Beiderbecke, Jelly Roll Morton, Sidney Bechet and their Pan-American contemporaries. Anat currently leads a young quartet with guitarist Gilad Hekselman, bassist Eduardo Perez, and drummer Ferenc Nemeth. Her playing and studying of a wide range of musical styles has culminated in her finding her own distinctive musical voice. Anat documented her bona fides on her debut CD, Place and Time, one of All About Jazz-New York's Best Debut Albums of 2005. On her strikingly original 2007 releases Noir and Poetica, she references many of the musical influences that have combined to create her tonal personality.

On Poetica, she plays exclusively clarinet, joined throughout by a rhythm section consisting of pianist Jason Lindner, bassist Omer Avital, and drummer Daniel Freedman, and on four tunes by a string quartet. The repertoire includes Israeli, Brazilian, and French songs, as well as John Coltrane's Lonnie's Lament, two of her original compositions, and an impressionistic work by bassist Omer Avital, with whom she shares arranging duties. For her CD Noir, she frames sparkling inventions on tenor saxophone, soprano

Anat approaches everything she plays with deep scholarship and a profound quality of soul. She never plays to the gallery; even her high notes are not for show, but part of the musical message adds Morgenstern. There are not many musicians on today's scene who communicate such a genuine joy in what they do. She loves to make music, and while she is a physically expressive player, her moves, like her music, are a true reflection of what she feels. Anat's performance history and her two latest albums, taken together, surely confirm Nat Hentoff's claim that her range of musical challenges recalls what Duke Ellington used to tell me about his refusal to limit music to any category.'