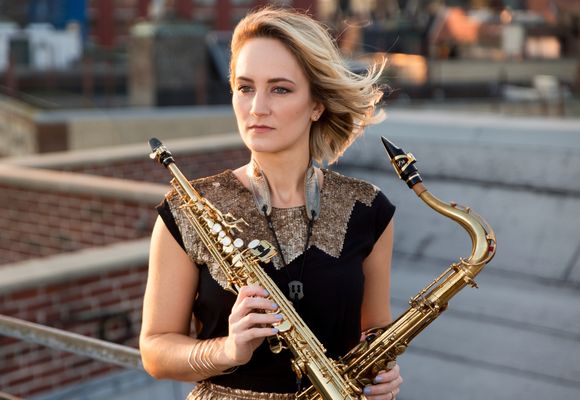 Musician/Composer Roxy Coss has become one of the most unique and innovative Saxophonists of her generation, a definitional voice of the Millennial Movement in Jazz. Winner of a 2016 ASCAP Herb Alpert Young Jazz Composer Award, the Downbeat Critics’ Polls listed her on the "Rising Star" list for Soprano Saxophone the past three years. Originally from Seattle and now a fixture on the New York scene, Roxy has performed extensively around the United States, Canada, and Europe.

On March 31st 2017, Coss releases her third album as a leader, and first release on the Posi-Tone Record label, Chasing the Unicorn. It will feature her on Tenor and Soprano Saxophones and Bass Clarinet, alongside her working Quintet with Alex Wintz (g), Glenn Zaleski (p), Rick Rosato (b) and Jimmy Macbride (d). In addition to six original compositions by Coss, the album includes tunes by Wayne Shorter and Joe Henderson, a Paul McCartney tribute, a Willie Nelson adaptation, and a Lionel Loueke original. In January 2016, Coss released her sophomore recording as a leader, Restless Idealism, on Origin Records, featuring 10 original compositions; the follow-up to her self-titled debut, Roxy Coss (2010).

As a side-woman, Coss has performed nationally and internationally with Jazz greats such as Clark Terry at the world-famous Blue Note Jazz Club, Louis Hayes at historic Minton’s in Harlem, and the Claudio Roditi big band. She has appeared with the Mingus Big Band, which is in residence at the Jazz Standard in NYC, and she has been a regular member of The Diva Jazz Orchestra since 2009. She was in trumpeter Jeremy Pelt’s group from 2012 through 2014, and toured with the MACKTET, led by Pelt and drummer Willie Jones III. She was also featured in the Off-Broadway hit, Maurice Hines is Tappin’ Thru Life. Past performances also include appearances with Wynton Marsalis, Joshua Redman, Joe Lovano, Mulgrew Miller, Harry Allen, Steve Wilson, Gary Smulyan, Buster Williams, Harold Mabern, Joe Farnsworth, Jerry Vivino, Eric Marienthal, and others.