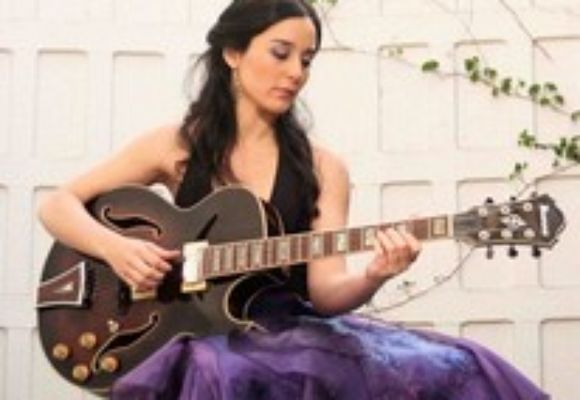 Jazz has been called 'The Sound of Surprise' and Camila Meza surprises with her unexpected conceptions of the beautiful songs she sings, the freshness of her improvisations, her bold rhythmic sense, and the interaction of her voice and guitar with the musicians of her band" Martin Joseph, El Mercurio.

Considered by the Chilean press as one of the most fresh and interesting musicians of the last years, Camila Meza moved to New York City in 2009 to attend the New School for Jazz and Contemporary Music. Since then, she has become a regular artist in the best jazz clubs in the city. As a vocalist and guitarist she belongs to a minority of jazz musicians who have developed the skill to play an instrument with great dexterity while at the same time maintaining a strong and prominent vocal presence. As a composer and arranger she has developed her own voice, embracing jazz tradition as well as her latinamerican background.

Camila Meza has recorded two albums under the Chilean record label Vertice Records and has performed in South America, Europe and the United States. In June 2009 she performed at the Blue Note of Poznan, Poland and at the Swidnica Jazz Festival, on May 2010 Camila Meza was one of the international artists at Festival Internacional de Jazz Peru in Lima. In summer 2011 she was part of the Bern International JazzFestival in Swizerland and was invited to perform at Bogui Jazz in Madrid, Spain.

Born in Santiago de Chile in 1985, she grew up in an environment where music was present most of the times. Being influenced by different styles of music, Camila Meza picked up the electric guitar at the age of 16, and started composing and playing in a number of rock and pop bands in Chile. At the age of 18, Camila decided to attend one of the few jazz and popular music schools in Chile: Projazz Institute. Not really knowing about her potential as a jazz singer, she was surprised when her tutors and professors, all well-known jazz musicians in Chile, began inviting her to perform with them at different venues and jazz clubs. The sensibility for improvisation they found in her, was soon developed through the study of jazz, and within a couple of years, she was already leading her own groups and ensambles with the best young jazz musicians in Chile.

Camila Mezas career and reputation in Chile grew quickly. Soon after establishing her own groups, she was invited to participate in jazz festivals all over the country, TV shows and radio stations. At the age of 22, she recorded her first album Skylark (Vértice Records 2007). In July of 2009, she recorded her most recent album Retrato ("Portrait", Vértice Records 2009), which exhibits a range of musical genres Camila has arranged into jazz compositions. Camila Meza has had the opportunity to meet, play with and learn from great musicians such as Peter Bernstein, Vic Juris, Jonathan Kreisberg, Sam Yahel, Billy Harper, Charlie Persip, Barry Harris, Jeff Tain Watts, Vijay Iyer and Cassandra Wilson. She also has had the opportunity to perform at a variety of venues in the city with experienced musicians such as Harry Whitaker, Bucky Pizzarelli, Jack Wilkins, Aaron Goldberg, Pat OLeary, Tal Ronen, John Benitez, Jason Lindner, Gabriel Alegria, Shai Maestro, Yayo Serka, Ziv Ravitz, Colin Stranahan, Luisito Quintero, Edward Perez and more.