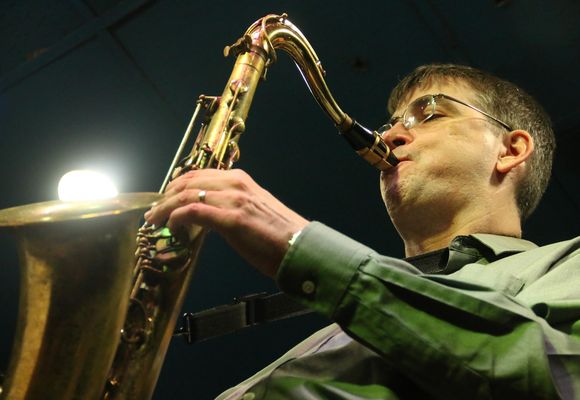 Mike Lees musical career has taken him many places musically and around the world. From the mid to late 80s he resided in Brooklyn, New York where developed his musical concepts with many associates and mentors. This period of creative inspiration was high-lighted by his lessons with Joe Lovano and his musical collaborations with his then roommate, Dave Douglas.

Inspired by the wealth of information these associations gave him, he returned to Cleveland to assimilate this material. This was a productive time musically. Along with constant practicing this period was punctuated by gigs with Marcus Belgrave, Bobby Watson, Geri Allen, Joe Lovano, Rosemary Clooney, Marlon Jordan, Johnny Coles and touring as a member of the Woody Hermans Thundering Herd.

In 1993 Lee resumed residency in New York City and flourished on the the jazz scene playing on numerous occasions with The Village Vanguard Orchestra (Formerly The Thad Jones/ Mel Lewis Orchestra) the Maria Schneider Orchestra (with whom he was featured in Marias CNN profile) and the Bill Mobley Big Band with which he performed and recorded along side acclaimed pianists James Williams, Harold Mabern and Mulgrew Miller. He has appeared around town with small groups which include New York musicians such as guitarists John Hart and Ron Affif, bassist Ron McClure, and drummer Elliot Zigmund.

Two of Mikes compositions were selected among the top five in the 1997 Thelonious Monk Institute of Jazz and BMI International Jazz Composers Competition. He was a member of Joe Lovanos Celebrating Sinatra touring ensemble. His critically acclaimed CD, Above the Battleground, Consolidated Artists Productions (CAP), featuring Tim Hagans on trumpet, Tim Horner on drums, Matt Ray on piano and Ben Allison on bass was released in 1998. My Backyard (Omnitone) released in 2000. Both albums received very high praise from trade publications.

Beginning in the late 90s, Mike became a very in demand Jazz Educator and guest soloist. He has toured the United States and Europe since then, performing with local rhythm sections and presenting clinics at over 100 universities and schools.

Mike Lee has been a part of the greater New York Jazz Scene for almost 30 years. Since his early associations with Dave Douglas and Joe Lovano in the 80's, through his stint with the Woody Herman Orchestra and regular gigs with The Village Vanguard Orchestra and Maria Schneider Orchestra in the 90's to his current associations with Oliver Lake's ensembles, Wallace Roney Orchestra, and Michele Rosewoman's New Yor-Uba, Lee has a proven track record as a versatile soloist and a consummate ensemble musician. As a leader, he fronted the renowned Cecil's Big Band for six years and co-leads the ground breaking quartet, New Tricks. He performs with his trios regularly at his weekly Hat City Kitchen Jam Session as well as Trumpet's Jazz Club and other area venues.