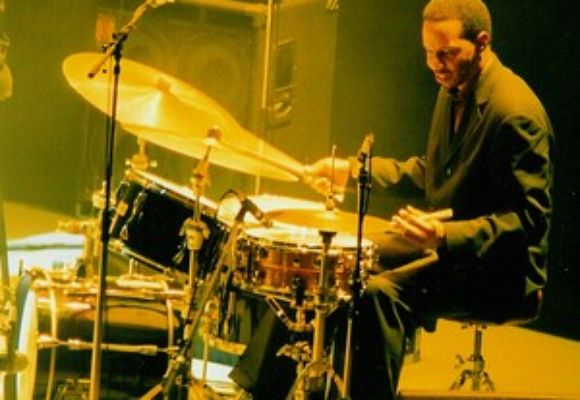 Born in Los Angeles, CA on June 8, 1968, Jones' earliest exposure to music was his father, Willie Jones II, an accomplished and notable jazz pianist, who offered guidance and inspiration to his gifted son. Dedicated to the further development of his skills, Jones III spent the next few years working diligently with acclaimed drummers and music instructors, and began performing with distinguished musicians by the time he was in his teens. Jones completed his academic training after receiving a full scholarship to the California Institute of the Arts, where he studied under the tutelage of the legendary Albert "Tootie" Heath.

Before he was a semifinalist in the 1992 Thelonious Monk Jazz Drum Competition, Jones co-founded Black Note, one of the most promising jazz bands around. Following the rich soulful energy of the West Coast bop movement, Black Note's hard-swing sound propelled them to First Place in the 1991 prestigious John Coltrane Young Artist Competition. Jones contributed his skillfulness as both musician and producer on all four Black Note recordings entitled 43rd & Degnan and L.A. Underground (World Stage Records), Jungle Music (Columbia), and Nothin' But the Swing (Impulse!). By 1994, the band toured Europe and across the U.S., and was the opening act for Wynton Marsalis.

Near the end of 1994, while Jones was reaching for a higher level of drumming dexterity, he gained the privilege of playing sideman to the renowned vibist Milt Jackson. Here was where Jones learned the importance of pacing and sensitivity. Meanwhile, his musical career continued to unfold. From 1995 through 1998, Jones was a member of Arturo Sandoval's band and is featured on Sandoval's Grammy Award winning release Hot House (N2K). Subsequently, Jones recorded with Horace Silver on the album Jazz Has a Sense of Humor (Impulse!), and on Roy Hargrove's CD releases Moment To Moment and Hard Groove (Verve). He can also be heard on Eric Reed's latest release, Here (Max Jazz).

From 1998-2005, Jones was a member of and toured with the prominent Roy Hargrove's Quintet, and can be heard on Hargrove's latest album release Nothing Serious and RH Factor's Distractions. Continuing the pursuit of musical artistry, Jones not only made his debut as a bandleader in 2000 with his premier record Vol 1...Straight Swingin' (WJ3), but he also revealed his proficiency as a composer as well as a producer. He released his second acclaimed CD in 2002, Vol II...Don't Knock The Swing. Currently, Jones is touring with Eric Reed, Kurt Elling and Hank Jones.