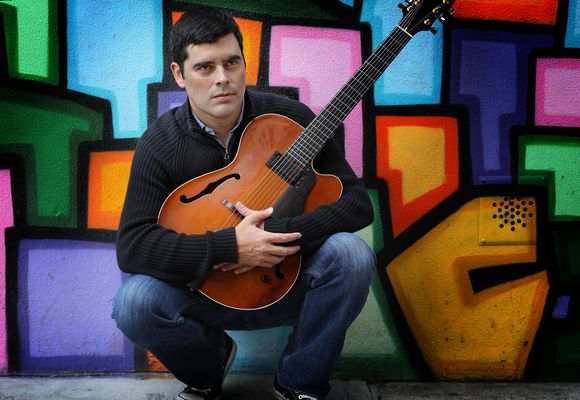 Molding the modern musical sophistication of New York with the soul of New Orleans is the mission of jazz artist Davy Mooney. Hope of Home is his latest CD release on Sunnyside Records, and the title reflects the hopes and anxieties associated with Mooney’s return to his hometown of New Orleans after six years, on an off, living in New York. The CD features Brian Blade, Jon Cowherd, John Ellis, and Matt Clohesy, returning cast members from 2012’s Perrier St and helpful guides through this phase in Mooney’s long journey as a jazz musician and novelist.

The journey has not been without bumps in the road and detours foreseen and unforeseen. The largest of these was 2005’s Hurricane Katrina, which sent Mooney fleeing mid-city New Orleans for Washington D.C., where he participated in the 2005 Thelonious Monk International Jazz Guitar Competition (held barely two weeks after the evacuation of New Orleans!) and placed third overall. It was there that he met the great guitarist and vocalist John Pizzarelli, with whom he recorded the 2009 duo 7-string guitar release Last Train Home, on Challenge Records. After the competition Mooney made the choice to relocate to New York and ever since he has bounced back and forth between the mean streets of Brooklyn and Queens and the swamps of New Orleans.

He studied at the Monk Institute of Jazz Performance, from 2007-2009, recorded a CD of his original compositions for the Japanese label Spice Records entitled Astoriano (a pun on the Queens neighborhood “Astoria” and “N.O.”), and performed in Japan, Brazil, India, Panama, Myanmar, Poland, Mexico, Germany, and all over the continental US with a long list of jazz luminaries including Terence Blanchard, Dee Dee Bridgewater, Herbie Hancock, Chris Potter, Nicholas Payton, and many others.

Mooney is an Assistant Professor at the University of North Texas, where he runs the jazz guitar program formerly headed by Fred Hamilton and Jack Petersen.

Mooney has also made the foray into the literary world by self-publishing two novels (which explores the same New Orleans/New York themes of his music): his newest offering Annalee, and 2012’s  Hometown Heroes.

Both Hope of Home and Perrier St are available from Sunnyside Records. Mooney continues to tour internationally in support of both releases.