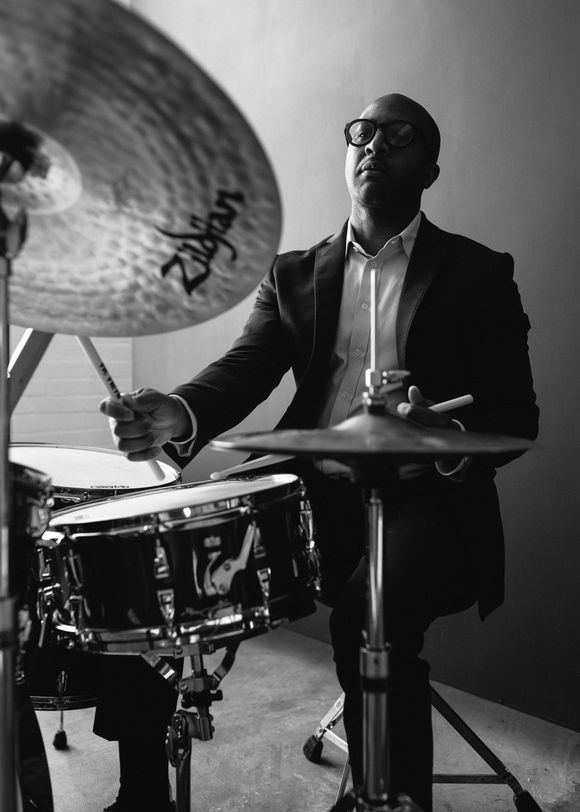 QUINCY DAVIS, born in Grand Rapids, MI, comes from a very musical family.  He began taking piano and drum lessons at age 6 and often would play with his brother Xavier Davis (piano) in their basement.  In his elementary and middle school bands, he also played trumpet and tuba. Both of his parents are musicians who exposed him to all different styles of music including instrumental jazz, vocal jazz, European classical, gospel, opera, R&B and jazz fusion.

His formal musical studies began during his 11th grade year at Interlochen Arts Academy (IAA). There he studied classical percussion as well as trap-set drumming. IAA is where he received his first experience playing with a jazz band. IAA proved to be an important contribution to Davis’ future successes.

In 1995, Davis graduated from IAA and began college at Western Michigan University. There he studied with drum master, Billy Hart. Along with learning more about the drums, Mr. Hart instilled in Davis a deep knowledge of music, which has proven to be very important to his career.  During these collegiate years, Davis played at various collegiate jazz festivals where notable musicians like Benny Green, Bunky Green, Jon Faddis, Roy Haynes, Carl Allen, Louis Hayes, and Wallace Roney heard and recognized Davis’ talents with written accolades and awards.

After graduating in 1999, Davis taught elementary and middle school instrumental music in the Grand Rapids area for one year before moving to New York City.

In 2010, Davis accepted a teaching position at the University of Manitoba (Canada) where he was the Assistant-Professor of jazz drumset studies. Though performing has been a major part of his life, he has also always enjoyed teaching and sharing his musical experiences with young and talented students.  The University of Manitoba proved to be the perfect fit for this highly respected performer and educator.

Davis continues to stay very active as a performer while teaching full time at the University of North Texas.