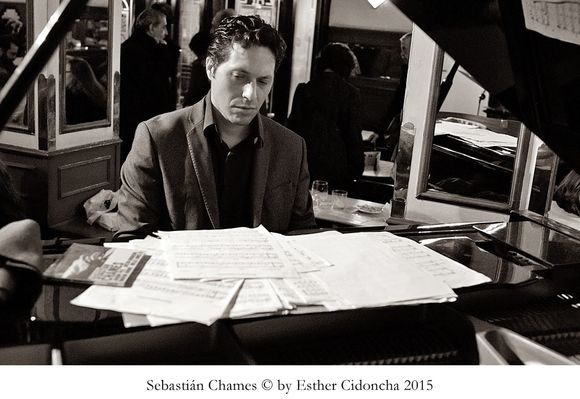 Sebastian Chames is a pianist who belongs to the new generation of jazz musicians in Spain. He has completed his musical training in New York with Rodney Kendrick, Bruce Barth, Barry Harris and Fred Hersch, among others. In 2008 he released his first album “Primera Toma” as a band leader. In 2013, Chames released his second album “Reconstrucción” featuring an outstanding line up: Jeremy Pelt – trumpet, Justin Robinson - alto saxophone, Dwayne Burno - bass and Willie Jones III- drums; and in 2015 he recorded his third album “Pick Up the Phone” with Jeremy Pelt – trumpet, Greg Tardy - tenor sax; Gerald Cannon- bass, and Willie Jones III- drums. Chames albums were all recorded in New York and received rave reviews by the specialized Spanish press (Diario Abc: “…Chames is confirmed as one of the pillars of "New Jazz" made in Spain” Diario el Mundo: “Tradition and innovation are united in the music of Sebastián Chames”). He currently leads his quintet which regularly plays in clubs and festivals throughout Europe featuring an extraordinary line up of musicians such as Jeremy Pelt, Steve Nelson, Willie Jones IIII, Greg Tardy, Perico Sambeat, Chris Kase and Bob Sands, among others.  More information on Chames can be found at www.sebastianchames.com