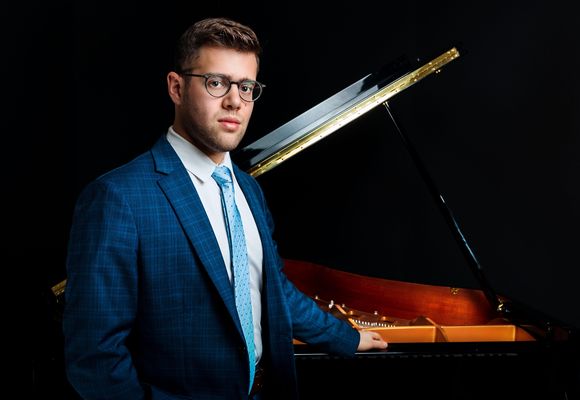 "On each of the aforementioned songs, and on every single original number, there are solos and surface elements to admire, be they funky, fiery or friendly. But that doesn't tell the whole story. Feifke packs so many subtle things into these songs, so each listen reveals something new. He artfully weaves fleeting riffs, background figures, and twists into his own designs, giving his septet plenty to work with. But the music doesn't collapse under the weight of intricacy. Feifke is an arranger-composer with good sense, always cognizant of how much is enough and how much is too much. He's a composer who's found his own sound, a pianist with a firm command of the instrument, and an all-around monster talent with a bright future ahead." Dan Bilawsky, All About Jazz

Steven Feifke, born June 21st 1991, is an American pianist, composer, and orchestrator. An avid and lifelong student of all music, Feifke’s work spans many genres and mediums. In 2014, he was commissioned by the 23Arts Initiative to write an arrangement of George Gershwin’s 1924 “Rhapsody In Blue” for jazz big band and concert pianist soloist (Tanya Gabrielian). Since then, Feifke has been commissioned to orchestrate music for a staged show at the famed Westgate Theater in Las Vegas, arrange music for classical chamber and studio jazz orchestras at Lincoln Center in New York City, and write music for albums distributed around the world. Feifke has also written original works for television and film media, and his music can be heard on the hit show “Comedians in Cars Getting Coffee” produced by Jerry Seinfeld, and on “Impractical Jokers” on TruTV.

Feifke maintains an active touring schedule in and out of New York, and leads several of his own projects of various sizes: a big band, a septet, a trio, and a five piece ensemble called “The Songs of Winter Band.” He also co-leads an art music project with vocalist Martina DaSilva, called “With Strings.” Feifke has been named a semifinalist in the Thelonious Monk International Piano Competition (2011 and 2018), and has performed internationally since 2011. He is based in New York City, and when he is not touring he can frequently be heard performing at venues like The Blue Note Jazz Club, Smalls Jazz Club, and Dizzy’s Jazz Club at Lincoln Center.

Education is and has always been a central part of Feifke’s career. He considers teaching and learning to be two sides of the very same coin, and believes in creating productive learning environments for all his students through the creation of  individualized curriculums. In addition to running a private composition and performance studio in NYC, Feifke was also the 2017/2018 recipient of the Arts Mid-Hudson “Pro’s Meet Pupil’s” grant for his curriculum designed to teach students jazz history through performing a guided repertoire of large ensemble music. Feifke has also been artist in residence at Northern Illionois University and given masterclasses at Williams College and Yale Undergraduate Jazz Collective. During these classes, he focuses on his concept of “Ears First,” which teaches patience and active-listening on and off the bandstand. He also talks about general jazz topics like composition, improvisation, and orchestration.

Feifke's debut record as a bandleader is called "Peace In Time," and features twelve tracks comprised of original and arranged work for his septet. He holds a BM (2013) in Jazz Studies and a minor in Economics from New York University. He also holds a MM (2018) from Manhattan School of Music in Jazz Composition.