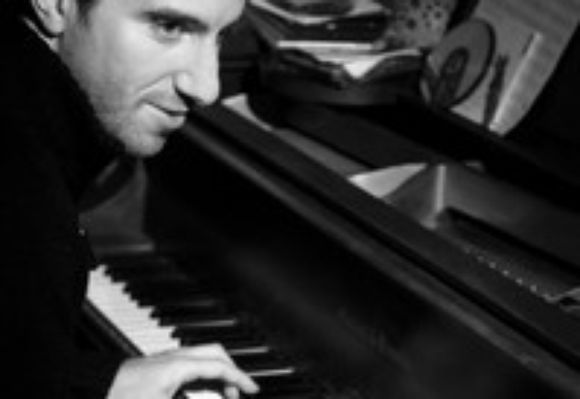 Aaron Goldberg is a pianist and composer performing at the vanguard of jazz music.  His most recent album on Sunnyside Records is entitled The Now, (2015)featuring his working trio with two of the finest musicians of his generation, bassist Reuben Rogers and drummer Eric Harland.  In addition to performing and recording with his trio, Aaron has spent the last 20 years working with many of the most brilliant voices in jazz--Joshua Redman, Wynton Marsalis, Betty Carter, Freddie Hubbard, Kurt Rosenwinkel, Al Foster, Nicholas Payton, The Lincoln Center Jazz Orchestra, Ravi Coltrane, Madeleine Peyroux, Peter Bernstein and Cecile McLorin Salvant among others.

His prior albums on the Sunnyside label are two co-led projects: the first YES!, (2012) a trio celebration co-led by Omer Avital and Ali Jackson Jr. and the second a critically-acclaimed collaboration with Argentinian composer Guillermo Klein, entitled Bienestan (2011). These follow upon Home (2010) and Worlds (2006), which feature the sensitivity and dynamism of his trio along with special guests.  His first recording under his own name, Turning Point, was released on the J Curve label in 1999, followed by Unfolding in 2001.  As a co-leader Aaron has recorded 4 albums with the OAM Trio, and as a sideman and collaborator he appears on over 80 albums with artists ranging from Terry Gibbs to Eli Degibri.  In 2004/2008/2012 he produced Jazz for America's Future and Jazz for Obama, historic fundraising concerts for Sen. John Kerry and President Barack Obama respectively.

Aaron was born in Boston and got hooked on jazz in high school by Bob Sinicrope of Milton Academy and then saxophonist Jerry Bergonzi, two master educators.  In his own words: “At first improvisation was a mystery and a puzzle, but soon it became a profound inner and outer journey as life and music entwined.”  After receiving awards from Berklee College of Music and DOWNBEAT Magazine, Aaron left at age 17 for NYC.  At the New School for Jazz and Contemporary Music in 1991 he met many of his current contemporaries and friends, including Omer Avital, Ali Jackson, Avishai Cohen, Brad Mehldau, and Peter Bernstein among others.

In 1992 he returned to Boston and enrolled at Harvard College.  While at Harvard, Aaron worked with a wide variety of artists and won the International Association of Jazz Educators’ Clifford Brown/Stan Getz Fellowshipas well as the National Foundation for Advancement in the Arts Recognition and Talent Search.  Soon he was discovered by vocalist and first lady of jazz Betty Carter and was a founding member of her historic Jazz Ahead program.  He continued to perform at clubs around the Eastern seaboard, often commuting back and forth to NYC in the post-midnight hours.  Aaron graduated magna cum laude from Harvard in 1996 with a degree in History and Science and a concentration in Mind, Brain and Behavior.   On the weekends he held a long-time residence at Wally's Cafe in Boston, and the fall after graduation he moved to Brooklyn.

Aaron wasted no time in the Big Apple.  He established himself as an in-demand sideman, performing with a wide array of leaders including Al Foster, Freddie Hubbard, Stefon Harris, Tom Harrell, Greg Tardy, John Ellis, Nicholas Payton and others.  In 1998 he joined the band of Joshua Redman, with whom he toured for 4 years and recorded two albums (Beyond, 2001 and Passage of Time, 2002).  He subsequently spent 3 years performing with guitar guru Kurt Rosenwinkel and a year with trumpet icon Wynton Marsalis and the Lincoln Center Jazz Orchestra.

Aaron is an invited clinician at jazz workshops, universities and conservatories worldwide, as well as a member of the instrumental faculty at the New School for Jazz and Contemporary Music.  He the co-arranger/composer (with John Ellis) of the Baby Loves Jazz series of books and cds, and the musical director of All Souls at Sundown, a jazz and poetry series in NYC.  In 2010 Aaron received a Masters Degree in Philosophy from Tufts University.

“One of jazz’s most delectable trios…a superlative group.  The ensemble has forged a singular sound with an expansive textural palette and a tenaciously intuitive approach to shaping material on the bandstand.Goldberg possesses exceptional technique and taste.” - The Boston Globe

“Selfless in all the right ways.  Doesn’t set out to demonstrate virtuosity, speed, or heat, though all three are at his disposal.  He’s versatile and impressive, and he swings hard.  A sharp young pianist with a superb rhythm section, Goldberg has honed his trio to a fine point over the years.  His bright fluency and pristine articulation are the guiding characteristics ofthe band - The New York Times

“A talented artist whose calling card is unadorned musicianship.”- Billboard

“Boundless imagination, burning intensity, exquisite sensitivity and abundant soul—Aaron Goldberg truly has it all.  One of the most exciting, inventive and lyrical pianists you will ever hear.” - Joshua Redman

“Aaron Goldberg is a modern improviser of great clarity, finesse and dexterity.  He has a first-class technical command of the piano, a unique rhythmic sophistication, attention to the nuances of thematic development and a penetrating intellect.” -Wynton Marsalis

"Jazz doesn't have many great albums featuring two pianists…so 'Bienestan' is exceptional in more than one sense. The music is complex but never cold, and when the keyboardists do square off alone they sound entwined, like extensions of each other." The New York Times.

“On this lush and superlatively swinging set, Jackson, Goldberg and Avital explore the value of time and space, and what happens when those musical principles are measured with grace and a little grit. The YES! Trio seemingly knock back a few cool ones, take their own sweet time and put some serious soul to CD.” DOWNBEAT Magazine.

“‘Home’ is full of swirling currents and dizzying flourishes, but its basic temperament is reflective, inward-seeking. It’s a statement of confident serenity.” The New York Times.