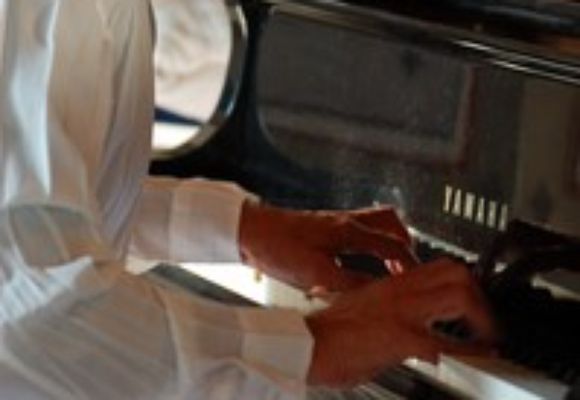 Known for his Bill Evans-like lyricism and strong sense of swing reminiscent of Wynton Kelly, Vladimir Shafranov was born in 1948 in Leningrad, Russia. He lived in many parts of the world, including Israel and the US, before settling down in Finland where he now resides with his wife. Vladimir's approach to the piano is flowing and lyrical -- sometimes bold, but often colored with slightly sentimental notes -- yet never in a way that's too hokey, or too flowery. During his 15-year stay in New York City, he played with prominent jazz musicians including Ron Carter, Eddie Gomez, Marc Johnson, Al Foster, George Mraz and Mel Lewis, and attracted attention as a unique artist who combined the sensibilities of Russian folk music, contemporary music and jazz. He became a sensation in Japan when his first leader album Live At Groovy (recorded in 1981) was issued from Atelier Sawano in 1999. With the follow-up hit of White Nights, a New York recording with George Mraz and Al foster which gained a "classic" status among piano trio fans, he cemented his place as one of the most popular jazz pianists in Japan. Since then he has made numerous albums for Atelier Sawano, most recent of which is brand-new New York Revisited, a reunion session with bassist George Mraz after 16 years.