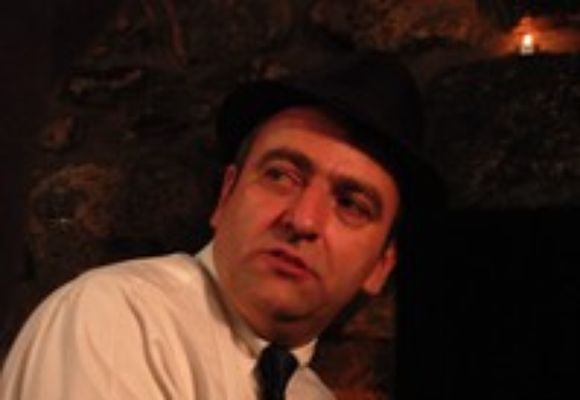 honored artist of the Republic of Armenia

Vahagn Hayrapetyan was born in Yerevan, Armenia on August 30, 1968. Graduated from the music school after P.I. Tchaikovsky and Yerevan State Conservatory as pianist and composer. Vahagn's exceptional manner of playing has evolved for years - carried away with jazz in his early years, he learnt from such jazz be - bop legends as Barry Harris and Frank Hewitt in New York and  worked and share stages with many legendary jazz musicians,such as Elvin Jones,Jimmie Lovelace,Leroy Williams,Ari Roland,Zaid Nasser, Chris Byears, Yaala Baalin, Keith Baala, Jason and Delfeo Marsalis and many more. He recorded and released three albums in NEW ORLEANS - ”Love for sale” with Clarence Johnson III, “Tripp to New Orleans” with Johnny Vidakovich and Ed Wise and “Bop it up” with Wendell Brunious,Brice Winston, Bill Huntington and Jason Marsalis.

Since 1998 pianist and keyboard player of world famous ARMENIAN NAVY BAND. In 2004 organized his own band “Katuner” (the "Cats"). Gave a lot of concerts all around the world both as a solo performer and together with different ensembles, performing with many prominent jazz musicians. Since 2008 - the Honored Artist of Armenia.

Since 1980's the leader of his JAZZ TRIO AND QUARTET in Yerevan, performing locally and internationally in different music clubs and concert halls. Vahagn often appears in Moscow jazz clubs and plays with the leading Russian jazz musicians such as Igor and Oleg Butman, Sergey Golovnya, Yakov Okun, Sergey Vasilyev, Pavel Temofeev, Peter Vostokov and others. A regular and most welcome guest in one of his most favorite Moscow jazz clubs 'Esse'.

Often performs around the Russia together with one of the Russia's leading jazz pianist Daniil Kramer with whom they released their first duo album “ Live in Yekaterinburg” in 2013.

Besides his career as a jazz piano player, Vahagn has been teaching jazz in Yerevan, Syria, Iran, Lebanon and Jordan. He teaches and performs with Ari Rolland, one of the greatest bassist in the world, and his band within yearly “Jazz futures” program, organized by US embassy in Cyprus.

Vahagn is the author of the sound tracks for such movies as “Bounded Parallels”, “If Only Everyone” and “Shor and Shor Shor”. For the music in "If Only Everyone" Vahagn won the award of Beijing International Movie Festival.

Vahagn's exquisite sound and outstanding performances always giving the audience unforgettable pleasure made him one of the most popular jazz piano players in Armenia.