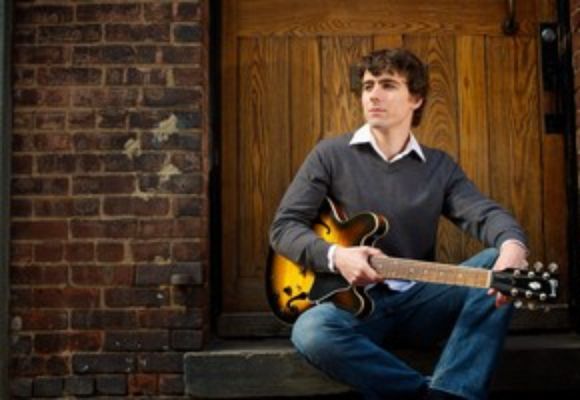 The Adam Larson Quintet "Round Midnight"

Nils Weinhold grew up in Bad Sachsa, a small village in the Harz mountains of Germany and started playing the guitar at the age of nine. In Germany he took lessons with Andreas Jäger and German jazz guitar legend Prof. Michael Sagmeister, before attending the Conservatory of Amsterdam in 2004, where he studied Jazz Guitar with Maarten van der Grinten, Martijn van Iterson and Jesse van Ruller. In addition to his jazz studies he studied Classical guitar, under the instruction of Lydia Kennedy. After graduating in 2008 he moved to New York City to undertake the graduate program at Manhattan School of Music and studied with Chris Rosenberg, Phil Markowitz, David Liebman, Garry Dial and Justin DiCioccio. He received his Masters degree in May 2010.

In 2008 he received a full scholarship from the German Academic Exchange Service (DAAD) for his studies at Manhattan School of Music.

From 2005 to 2007 he was a member of the renown German National Jazz Orchestra (BuJazzO) lead by Peter Herbolzheimer. He performed with many highly established big-bands in Europe, Canada and the United States.

In 2011 he recorded the guitar part of Fabian Almazan’s film score for the film “The Recorder Exam”, the mini album “New York Sessions” with German pop/rock singer Till Bennewitz and his first CD as a bandleader.

In October 2011 Nils released "Shapes", his debut album as a bandleader, featuring Adam Larson, Fabian Almazan, Luques Curtis and Bastian Weinhold. The album is featured in the February 2012 issue of the German Jazz magazine Jazz Podium and in the February/March 2012 issue of Jazz Thing. In 2012 Nils started to focus on his career as bandleader and he is increasingly playing concerts under his own name at established New York jazz venues such as The Kitano, The Jazz Gallery, Smalls, Cornelia Street Cafe and The Bar Next Door.

Besides his career as a performer, Nils is teaching guitar at the Precollege of Manhattan School of Music in New York City, Zen Music Institute in New Jersey and privately. Nils is regularly giving clinics and workshops at high schools and music schools in the US, Canada and Europe.