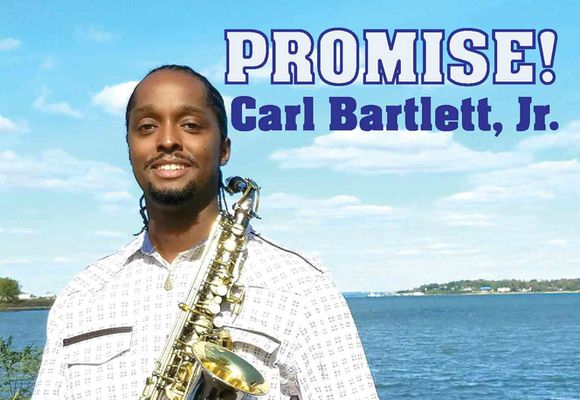 Award-winning, innovative artist, and native New Yorker, saxophonist Carl Bartlett, Jr.marked his arrival onto the jazz scene with the 2011 release of his Critically Acclaimed debut CD, Hopeful.  He has since emerged as one of the leading lights in the Post-Bop/Straight Ahead/Contemporary Jazz world, as both a player and composer.  “A tone that only the greats have the ability to attain” raves All About Jazz, describing the profound sonic nature of Bartlett, Jr.’s rich alto sax sound, which uniquely blends alto and tenor sax timbres.  Since achieving the high honor of becoming the 1st Place Winner in the USA (2nd in the world) in the prestigious 2015-2016 International Songwriting Competition (ISC) Jazz Category, Carl Jr. has embarked on his much anticipated sophomore album, "PROMISE!".  The new CD features his ensemble, The Carl Bartlett, Jr. Quintet, and it released to a SOLD OUT audience at the renowned JAZZ at KITANO, in Manhattan, NYC, on December 14, 2017.  A tour will follow.

As a bandleader, Bartlett, Jr. has established himself as a unique talent on the music scene.  He currently performs with his own ensemble, The Carl Bartlett, Jr. Quartet / Quintet, throughout the USA at many of today’s preeminent Jazz clubs, cultural venues, and festivals, such as Smalls Jazz Club, JAZZ at KITANO, Trumpets Jazz Club, Alice's Jazz and Cultural Society, The New Rochelle Jazz Festival, Foosaner Art Museum, Sistas’ Place (an Honorary NYS Landmark), The Lafayette Bar Jazz Nite,Queens Botanical Garden, and more, while garnering Sold Out shows, and exuberant audiences.  Carl’s artistry is also recognized by many heavyweights in the music industry, as he has toured with Jazz/Funk/Soul icons & pianists Lonnie Liston Smith, Brian Jackson, and Mark Adams, and has also performed with legendary trombonist Clifford Adams (of Kool & The Gang), the noted doo-wop group The Mighty Dells, Andy Montanez and Johnny Pacheco Salsa Orchestra, Wynton Marsalis, Antonio Hart, and Jimmy Heath and Roy Hargrove.

Carl was born in July 1982, into a musical family, in Queens, New York City. His father, Carl Bartlett, Sr. and uncle, Charles Bartlett, formed a noted R&B/Latin show and dance band, “The Bartlett Contemporaries”, during the 60’s, later giving young Carl an advanced tutorial on an eclectic mix of melodies, harmonies and rhythms. At 14, the multi-talented Bartlett, Jr. took on the alto saxophone, which combined with his burgeoning love for jazz provided him with enough push to heed his calling, upon listening to a Brecker Brothers album his uncle brought over one Christmas Day.  Carl sites saxophonists Eddie "Lockjaw" Davis, Sonny Stitt, Charlie Parker, John Coltrane, Joshua Redman, and James Carter, as a few of his key influences, early on.  At the tender age of 19, Bartlett, Jr. formed his own jazz band and proceeded to make a name for himself playing gigs throughout the New York, tri-state area. A few years later, Carl graduated from the prestigious Manhattan School of Music, earning a Bachelor of Music Degree in Jazz Performance in ’04.

Indeed, Carl Bartlett, Jr. has seen an abundance of success, in what is a blossoming career. His music has been very well received by a national and international audience, and his band, The Carl Bartlett, Jr. Ensemble, will be making its way throughout Eastern USA during the upcoming PROMISE! CD Release Tour (2017-2018), performing at major jazz clubs, cultural venues, and festivals in NY, NJ, CT, PA, FL, and Washington D.C.  "This band is extraordinary because it taps into the philosophy of reaching diverse audiences through playing the Jazz language”, says Carl. Saxophonist Carl Bartlett, Jr. has burst onto the scene with a monumental musical statement, and has earned the distinction as one of Jazz’s standout stars.